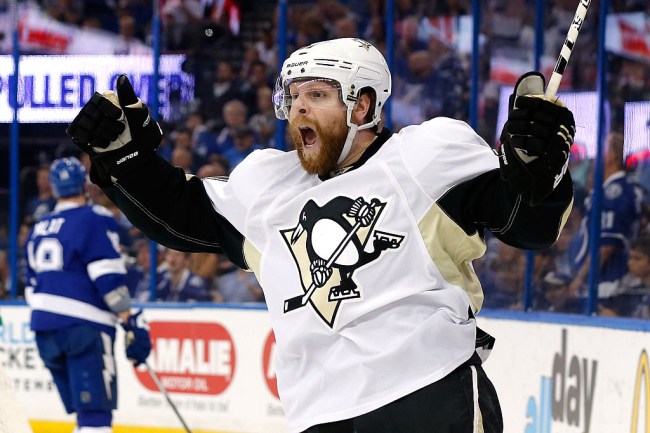 I can’t count the number of times professional athletes have made me feel bad about myself in the past year alone, whether we’re talking about Derek Jeter’s giant castle, the sick oceanfront mansion Kevin Durant recently put on the market, or the massive Seattle estate Shawn Kemp decided to unload.

However, not every player is capable of raking in the dough those guys have over the years, and as a result, there are plenty of people who are forced to settle for more run-of-the-mill homes—including former Pittsburgh Penguin Phil Kessel, who recently put his paltry $2.1 million Pennsylvania pad on the market after getting shipped off to the Coyotes.

On Wednesday, reporter Josh Rowntree stumbled across the listing and decided to share a picture of Kessel’s man cave, and while it might not be the funniest picture I’ve personally ever seen, it managed to severely tickle my funny bone.

This is the theater in Phil Kessel’s house. It might be the funniest photo I’ve ever seen. pic.twitter.com/83VRK7KzbJ

Is there’s a chance there was other furniture in the room that was taken away before the picture was snapped? Sure, but I’m going to tell myself that isn’t the case.

However, that might not even be the best part, as Rowntree also shared a few photos of posters hanging on the wall and it looks like Kessel might be a bigger Mariah Carey fan than I would have assumed.