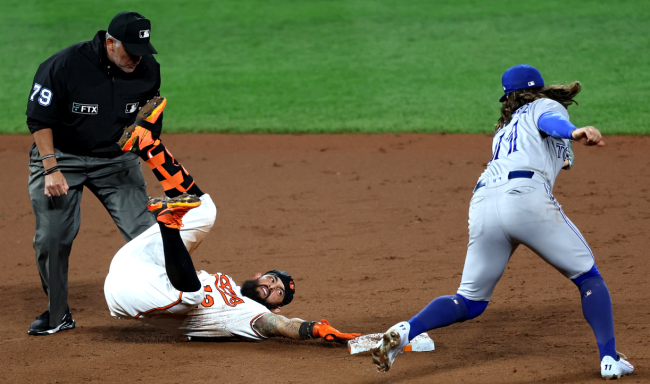 The Baltimore Orioles have been the surprise of the 2022 Major League Baseball season.

So, unlike in recent seasons, every game in September still holds a lot of importance for Baltimore, especially those against the Blue Jays.

Knowing this, Orioles players are pulling out all the stops, something that was certainly evident Tuesday night in bottom of the eighth inning.

During that inning, with a one-run lead, Baltimore second baseman Rougned Odor hit what appeared to be a single to center field. Instead, he turned on the jets and attempted to turn it into a double, but appeared to be out rather easily.

That’s when this happened…

Rougie Odor had the O's broadcast absolutely baffled with this swim move pic.twitter.com/l8sDYJ2lWr

This might be one of the best slides to avoid a tag I’ve ever seen pic.twitter.com/jPP6cNq3U4

To not lose contact with the base is crazy

It really was a roller coaster of emotions.

An exact summary of my emotions watching that Odor double pic.twitter.com/LmL0LYvb7s

Interestingly, this wasn’t the first time Rougned Odor got the attention of the broadcaster and fans Monday night.

He was also one of the peacemakers when benches cleared in the seventh inning after Bryan Baker struck out Blue Jays third baseman Matt Chapman.

The Blue Jays and Orioles benches clear after Bryan Baker struck out Matt Chapman to end the top of the seventh. pic.twitter.com/ta30veGijc

You really never know what you’re going to see or hear when you watch a Major League Baseball game.