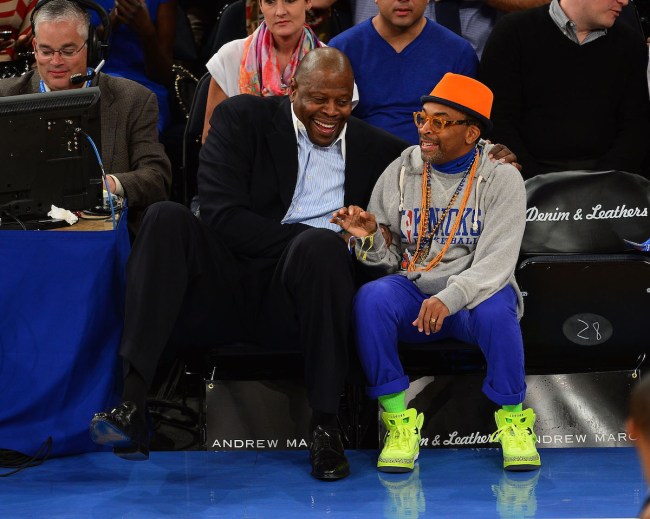 When it comes to ranking the most recognizable fans in all of sports, Spike Lee might just top the list, as the director/producer/actor has been a mainstay sitting courtside at New York Knicks games for decades. So he knows a little bit about the ins and outs of Madison Square Garden.

Of course, Lee did have a little spat with Knicks owner James Dolan last year, which prompted the entertainer to pretty much slam the entire franchise and proclaim he wouldn’t be buying season tickets any longer — something he had spent an absurd $10 million on during his lifetime. The whole thing made news and was just another black eye for both Dolan, the Knicks and Madison Square Garden.

Fast-forward to recently, and another Knicks legend — this time, it involved a franchise icon, Patrick Ewing — experienced some headaches during his visit to the most famous arena in the world.

Ewing, the head coach of his alma mater Georgetown, was reportedly stopped by security in MSG on Thursday during the Big East Tournament after nobody recognized him. Just a reminder, the guy’s a Towering Inferno, and stands 7’1″, so it’s hard to imagine anyone seeing him, thinking ‘hey, that guy kinda looks like Patrick Ewing,’ and then stop the dude for not having his credential. Yet, that’s what allegedly happened — and it’s caused some reactions in the sports world because the Knicks and James Dolan are somewhat attached to it.

One of the people upset with all this is Spike Lee, who went on ESPN’s First Take to give the most honest reaction to the Ewing incident. Take a look below at his comments.

Spike Lee isn’t happy about the Patrick Ewing incident: “Can any of you imagine Derek Jeter being stopped entering Yankee Stadium?”

Now, look, all of this might just be a misunderstanding and, more so, just the latest opportunity for people to pile on both James Dolan and the Knicks — which has a history of these kind of misunderstandings happening. But a spokesperson for Madison Square Garden did try to play damage control after the Patrick Ewing incident, releasing a statement to try and smooth things over.

“Jim [Dolan] and Patrick have a long-standing relationship; they spoke this afternoon and reaffirmed that. We all know, respect and appreciate what he means to The Garden and New York. Good luck to him and his Hoyas in the Big East semi-finals.”

That looks good on paper and all, but, sheesh, Ewing’s number is hanging in the rafters, so this is unacceptable on a whole different level. As Spike Lee pointed out on First Take, this type of thing would never happen to Derek Jeter in Yankee Stadium. It wouldn’t happen to Joe Namath in MetLife Stadium. It wouldn’t happen with Mark Messier and the Rangers. So something smells fishy here because of the James Dolan connection — even if Lee stops short of blaming the billionaire Knicks owner.

As somebody who’s has been credentialed plenty of times at sporting events, it’s easy to claim security was just doing their job. But most people aren’t a giant man who looks like (and is) Patrick Ewing. The guy owned New York City for a decade, so, regardless of excuses or apologies, this incident is another stain on James Dolan, the Knicks and Madison Square Garden. Fair or not, that’s how it goes these days.