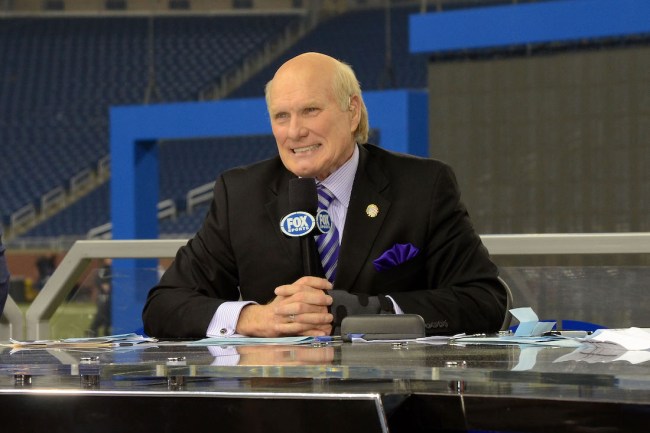 Anytime Terry Bradshaw opens his mouth, he tends to say something memorable. Whether that’s when he’s serving as an analyst for FOX Sports during the NFL season, or if he’s just voicing his opinion about where current players sit on the all-time list of greats, the Hall of Famer knows how to grab attention.

As old school as they come, Bradshaw doesn’t seem to be a big fan of the situation currently happening between the Green Bay Packers and quarterback Aaron Rodgers, with the latter allegedly trying to force his way out of town due to a contract dispute. In fact, one report claims Rodgers — the reigning league MVP — is already telling teammates he’s done with the Packers, while another one says the future Hall of Famer wants the team’s GM fired.

Given the fact Rodgers is under contract with Green Bay — one that he signed without anybody putting a gun to his head to do so — Terry Bradshaw thinks the unhappiness he’s showing is a bunch of hogwash. And, as only Bradshaw can, he went ahead and voiced his displeasure with the situation by making it known to a national audience, telling the Parkins & Spiegel Show on 670 The Score in Chicago that Rodgers is “dumber than a box of rocks” for being unhappy with his contract.

“Well, he’s just dumber than a box of rocks, isn’t he? I mean he signed that contract, he didn’t have to sign that extension. He got all that money. I don’t know what happened there, they draft a kid last year and he wasn’t happy about it. He goes out and becomes the MVP of the league, now he wants out. Now he’s claiming that they said they would trade him or what. I don’t know but listen, Aaron, I mean … If I’m Green Bay — here let me say this — If I’m Green Bay I call his bluff. I don’t budge. I do not budge.””

As many bumbling things as Terry Bradshaw says, this is actually pretty accurate. No disrespect to Aaron Rodgers — or any pro athlete who holds out for more money in a contract dispute — but the guy agreed to a new deal in 2018 and should honor it. Has he outperformed that contract? It’s tough to believe that seeing as how he earned a total of $98.2 million in guarantees, and made $14.7 million during the 2020 season. Like, that’s pretty fair market value compared to other superstars signal-callers in the league.

While Bradshaw often catches flak for sounding like an old Boomer oftentimes, in this case, he’s 100 percent accurate with his assessment about Aaron Rodgers. The quarterback might be unhappy, but when you sign a deal as massive as he did just three years ago, he doesn’t have the right to complain because the team drafted his (potential) replacement. As long as Rodgers keeps performing, nobody else will see the field, so he shouldn’t feel threatened.