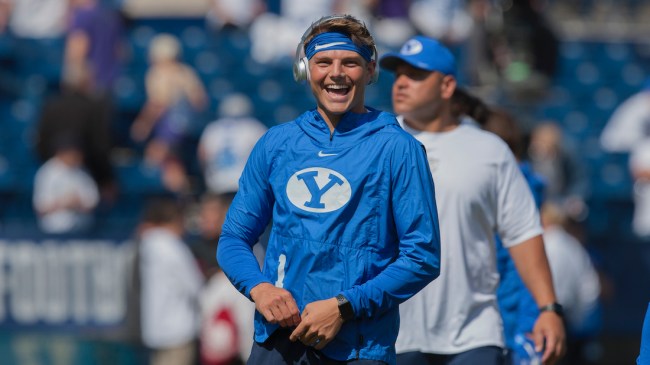 For most draft pundits, Zach Wilson is the second-best player in the upcoming NFL Draft. Hell, some people even think the former BYU quarterback has an edge over Trevor Lawrence, who’s expected to go No. 1 overall to the Jacksonville Jaguars — so there’s real hype about what the kid might be able to do once he enters the NFL.

How high are expectations for Wilson? Well, according to Mark Sanchez — a former top-5 pick of the New York Jets — he sees a little bit of Brett Favre in the NFL Draft prospect, telling Pat McAfee that Zach Wilson has the ability to make wild throws out of broken plays, similar to how Favre did. Take a look below at the full quote from Sanchez.

“I think he’s Brett Favre-ish,” Sanchez said. “He’s the kind of guy who will complete a left-handed pass at some point in his career. He might throw one around his back to the fullback. He’s that kind of guy and it is so fun to watch. But for a coordinator, you just have to know what you’re signing up for. As soon as that ball is snapped, you might not know exactly where it’s going, but there is a good chance it is going to the right spot.

“He’s not your typical five steps and hitch, rhythmic kind of guy,” Sanchez added. “He likes to throw off platform, in some ways, I feel maybe a little too much when you might not need it. When the pocket is clean, I don’t need you to do anything special. Just give me the routine ground ball and throw it to first base and we’re good.”

Now, with all due respect to both Zach Wilson and Mark Sanchez, being compared to Brett Favre might instill a little bit of worry for Jets fans. Don’t get be wrong, Favre was one of the most fiercest competitors ever, playing through pain, winning multiple MVPs and a Super Bowl, and setting a bunch of passing records by the time he retired. But he also had a habit for forcing things way too much, trying to play “hero ball” rather than take the simple pass. Considering this is one of the things Sanchez sees in Wilson, Jets fans might be a little nervous.

After living through three seasons of the inconsistent Sam Darnold — who was recently traded by the Jets to the Panthers — the last thing New York fans probably want (or need) is another quarterback unwilling to just make the smart play. Highlights are cool and all, but not when they’re ones that will have you remembered for the wrong thing; a la Sanchez’s infamous “Butt Fumble.”

With the Jets all but certain to take Zach Wilson No. 2 overall in the 2020 NFL Draft, fans should be excited about welcoming in a new face of the franchise. But playing in the NFL is tough, so the soon-to-be-rookie needs to focus on playing smart and not trying to complete a “left-handed pass” or get creative with a behind-the-back pass. More than ever, the Jets need stability at the quarterback position, so hopefully Sanchez’s Wilson-Favre comparison is more for the style of play and competitiveness, and not being so careless with the football.