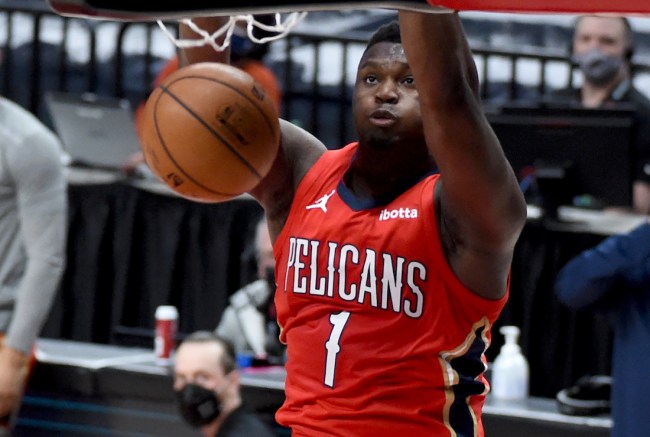 Zion Williamson was once the most coveted NBA Draft prospect in about a decade, with every single lottery team in 2019 praying they landed the former Duke freshman. As we all know, the New Orleans Pelicans ended up getting the lucky bounce, selecting the bullish forward No. 1 overall.

Prior to the Pelicans winning the NBA Lottery, though, there were plenty of people in the sports world who foresaw Zion ending up with the New York Knicks — especially because the franchise had some of the best odds to land the top spot. After the Knicks’ pick fell all the way to No. 3 in the 2019 NBA Draft, people laughed, trolled them on Twitter and, generally speaking, just figured it was the franchise’s latest L.

While New York didn’t land Zion Williamson via the draft a couple years ago, could the dude already have eyes on the Big Apple when he becomes a free agent in at least THREE years? According to ESPN’s Adrian Wojnarowski, the idea is “something to watch,” as Woj went on Get Up Monday morning talking about the (distant) possibility.

No offense to Woj, because he’s he best at his job, but have we not learned anything from the past? Like, wasn’t LeBron James eyeing the chance to play for the New York Knicks? Weren’t both Kevin Durant and Kyrie Irving doing the same a couple summers ago? Aren’t the Knicks always the high-profile tease for every NBA superstar each year — and still don’t have any of the aforementioned guys on the roster?

Considering the Knicks have a pathetic track record in acquiring superstars — and the fact that Zion Williamson probably won’t be a free agent for at least 3-5 years, depending on what the Pelicans do once his rookie deal runs out — fans on Twitter had a field day ripping Woj for his report. Take a look below at some reactions on social media.

These mf don’t want anyone to play for small market teams.

All of this to end up with Hasheem Thabeet on a max contract, Knicks will never be attractive with Dolan as the owner

Bro Knicks fans are going to be devastated in a few years. For their own sake don’t do this to them

oh my god he’s in his sophomore season lmao

So why all the speculation about Zion joining the Knicks at some point wayyyyy down the road? Woj’s report comes a day after the second-year star said he loves playing in New York, and gushed about how Madison Square Garden is his favorite place to play outside of New Orleans.

“New York is the mecca of basketball. I love playing here. I played here in college [at Duke]. This is my first time playing in the pros. This atmosphere, whether they’re cheering for you or booing you, it’s amazing. Outside of New Orleans, obviously, this might be my favorite place to play. I can’t lie to you.’’

Uh, doesn’t every single NBA superstar claim the exact same thing Zion did? Like, it’s tired AF hearing guys like LeBron and Kyrie and every other All-Star talk about New York being the mecca of hoops, and how the atmosphere in MSG is electric… only to avoid signing with the Knicks because the franchise is horrendous under owner James Dolan.

So is Woj’s report about Zion to the Knicks really “something to watch?” Probably. So go ahead and circle the calendar for the summer of 2025, Knicks fans, ’cause there’s a slight chance that the kid either signs with the Knicks or (once again) leaves them standing at the altar like all the other superstars have in the past.