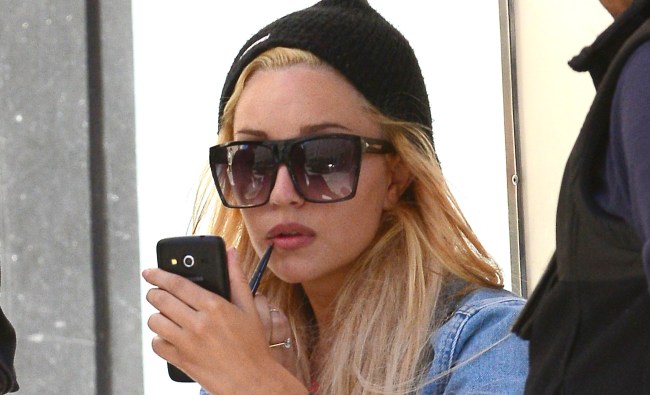 A week ago, troubled former actress Amanda Bynes announced to the world on social media that she is officially engaged to the “love of her life.”

The 33-year-old made the announcement with a photo on Instagram showing her wearing a massive emerald-cut engagement ring. She did not say at that time who the “lucky man” is, but it has since been revealed the the former All That star’s fiance is a 28-year-old man named Paul Michael.

Yes, Bynes now has two heart tattoos on her face.

Reportedly, the two of them met a little over two months ago at the sober living facility where they were both residents. They do not currently live together, according to a source close to Bynes who spoke to Entertainment Tonight.

The source also revealed that the engagement happened on Valentine’s Day, but Bynes’ parents have never met the man. Which is a problem since Bynes is still under a conservatorship can’t legally get married unless the judge and her mom, the conservator, officially sign off on it.

Bynes, who graduated from California’s Fashion Institute of Design and Merchandising in 2019, has at various times over the past few years stated that she was interested in making an acting comeback and/or starting her own clothing line, checked herself out of the sober living facility without the judge’s approval, who then ordered her to return (which she hasn’t).

On Tuesday, Bynes posted a video to Instagram thanking everyone and reiterating that she is still planning on launching her own line of clothing.

Drake, who loves texting with young actresses and singers, really needs to reach out to her and make sure she’s doing as well as she claims.