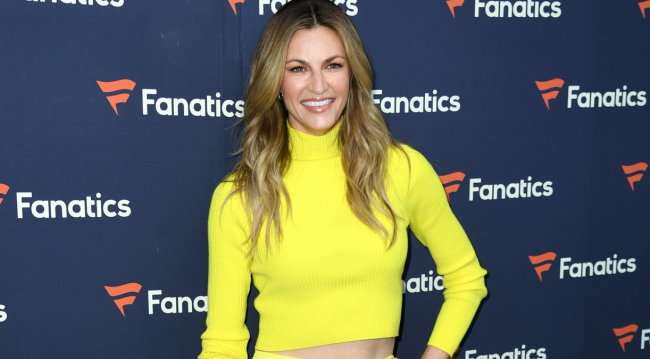 Fox NFL sideline reporter Erin Andrews has been going hog wild over the past several months revealing many of her secrets and sharing several behind the scenes experiences.

A lot of it has to do with the Calm Down podcast she now hosts with fellow NFL reporter Charissa Thompson.

Among the many revelations Andrews has shared recently are her feelings about the changes in the Fox broadcast booth, the best athlete to interview, the worst part of game day, her favorite Tom Brady off-field memory, and even went on a very relatable rant about unruly plane passengers and fans have loved all of it.

Speaking of Erin Andrews’ Tom Brady memories, Andrews recently revealed another one with former WWE announcer Renee Paquette on her podcast The Sessions.

— Calm Down with Erin and Charissa (@calmdownpodcast) September 12, 2022

With TB12 set to join the Fox broadcast booth if and when he ever retires (which, if Gisele has her way sounds like it will be next year), Paquette asked Andrews if she has any advice for him.

“I don’t feel like Tom Brady needs advice with anything,” Andrews replied.

“I’ll say this about Tom, knowing Tom on and off the field, the guy always smells fantastic.”

“I can say that because my husband is always like, ‘Did you smell this guy?’ He changes up his cologne, and I know this because it’s always a ‘hey, can you find out what Tom’s wearing?’ Because it turns into a stocking stuffer for my husband.”

Paquette then asked what cologne Tom Brady (her go-to impression) wears that smells so fantastic.

“At one point he was using a Tom Ford,” Andrews responded. “I know this because I gifted it to my husband.”

The guy smells FANTASTIC! But does that really shock you?? Loved this @ReneePaquette https://t.co/GvtZnI9bcX

After posting the clip, Paquette tweeted back at Andrews, “Hahaha I would honestly be so disappointed if he didn’t smell incredible! The honor of catching a whiff!”

Naturally, because internet, this conversation led to several very witty questions and comments on Twitter.

Does he smell better than a new Infiniti? I don’t think you can beat new car smell.