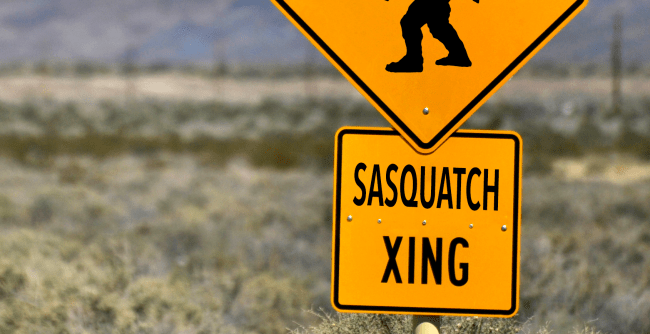 Much like with increase in the number of UFO sightings since the coronavirus pandemic began (that’s because the aliens have been monitoring us to see how we’d handle it), the number of sightings of the legendary Bigfoot seem to have gone up as well.

According to KOEL-AM News, the witness in the Bigfoot sighting, Jeremy, told them, “I was doing a morning walk at White Water Canyon with my sister, who lives up in Dubuque. I pointed out the figure and my sister laughed saying it was a person. We called out to it but got no response.”

Jeremy also added, “You don’t have to believe me. I wouldn’t believe me, but now that I’ve seen whatever that was first hand… I think I may be a Bigfoot believer now.”

To add even more to the mystery, there had been a total of 76 recorded Bigfoot sightings in state of Iowa prior to Jeremy’s encounter.

While it is no Bigfoot hotspot like Michigan, Iowa should certainly be added to the list of potential habitats for the mythical cryptid which already includes the states of Oregon, the Florida panhandle, northern California, Oklahoma, North Carolina, and West Virginia.

The previous recorded encounter with Bigfoot in Iowa took place on July 25, 2017 in Chickasaw County when a witness and his wife were walking in the woods and heard a sound like they had “never heard” before.

A neighbor of the witnesses told an investigator with the Bigfoot Field Researchers Organization (BFRO) that he had heard about several Bigfoot sightings in the nearby Cardinal Marsh Wildlife Area.

Meanwhile, another Bigfoot encounter was recorded closer to this latest sighting on April 8, 2016, taking place in Dubuque County.

That Bigfoot sighting was the fifth in a series of encounters and a follow-up investigation by the BFRO said the height of the beast was estimated to be at 7 feet.

“Weather each time was nice temperatures and calm,” wrote BFRO Investigator TK Bell. “All of the sightings have occurred within this same one mile radius on the family owned property. Weather has all been nice temperatures and calm, not cloudy or windy. No other sightings have occurred since the last one. No sounds or smells were noticed. This witness is a hunter, used to hunting on the family property filled with woods and creeks, found him to be a creditable witness.”

There is a reason why, according to Google Maps, Bigfoot goes by 58 different names around the world. It’s because, as a wise lawmaker in Oklahoma is well aware, the creature is (probably) real. We simply have to catch one of them to prove it.