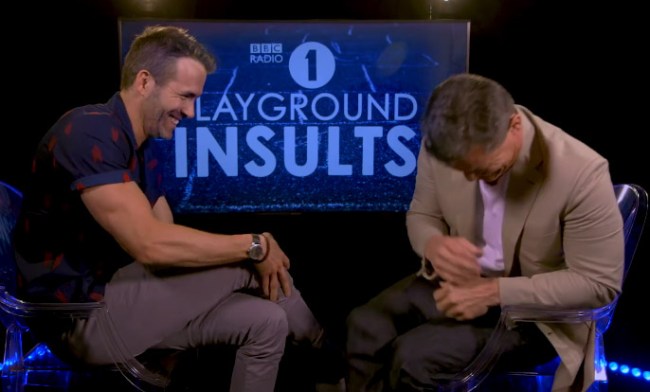 If you are at all familiar with BBC Radio 1’s recurring segment called “Playground Insults” then you know that if Ryan Reynolds is involved it’s going to be some very high-quality, very low-brow entertainment.

If you are not familiar with that segment, basically they just get two stars who are currently appearing in a movie together, sit them down face to face and make them trade insults, no holds barred.

In the past they have had actors like The Rock and Kevin Hart face off (so good), Jennifer Lawrence and Chris Pratt (also laugh out loud funny), and Will Ferrell and Mark Wahlberg (classic).

Anyway, as you can imagine, Reynolds got off a few good ones at Josh Brolin’s expense.

For example, after Reynolds mistakenly brings up drinking, he tells Brolin, “You’re so bad in Goonies, that when you come on screen people don’t drink, they punch themselves in the dick for five straight minutes.”

Then he pretty much clinched the W with…

Poor Brolin, he never really stood a chance… even with the Green Lantern movie available as ammunition.

Also, while Ryan Reynolds was in Great Britain he and Brolin stopped by The Graham Norton Show, along with Deadpool’s new BFF David Beckham. It too was highly entertaining.

Since we’re talking about it, these were also great…