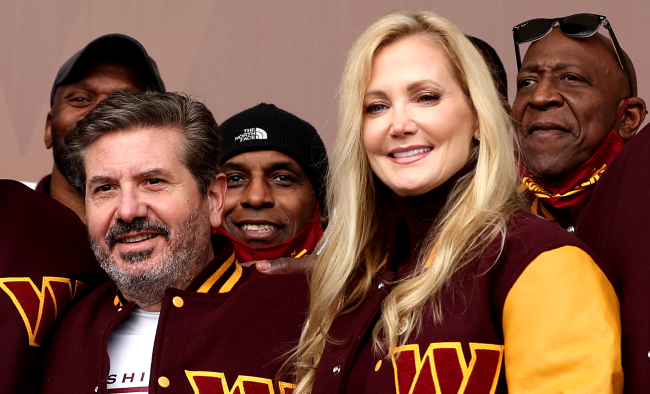 The never-ending investigation into alleged misconduct by Washington Commanders owner Daniel Snyder (pictured above with his wife Tanya) and others in the team’s front office took another turn on Thursday.

Just one day after the franchise unveiled its new team nickname and uniforms, six former Washington employees spoke to members of the U.S. House of Representatives’ Oversight Committee.

“We launched this investigation because the NFL has not been transparent about the workplace misconduct issues it uncovered within [Washington],” said Rep. Raja Krishnamoorthi in a statement that preceded testimony, CBS Sports reported. “These victims are bravely coming forward with their stories, sharing details of despicable abuse in their workplace. … Our investigation will continue until the perpetrators of sexual harassment are held accountable.”

The new accusations against Daniel Snyder are, once again, very disturbing

During the testimony by the former Washington employees, Applegate stated that she was “told not to speak to Dan Snyder or to even look at Dan Snyder” after voicing concerns about the team’s former chief marketing officer harassing her on a daily basis.

Baker stated that he and others on the team’s video production staff were “told to edit together lewd footage” of the team’s cheerleaders from their “Beauties on the Beach” calendar photo shoot. He said this was done “at the request of Daniel Snyder” and the footage included moments where cheerleaders’ “breasts and pubic areas were exposed.”

Embed from Getty Images
Ana Nunez, former Coordinator of Business Development & Client Service and Account Executive for the NFLs Washington Football Team, testifies before the House Oversight Committee during a roundtable Examining the Washington Football Teams Toxic Workplace Culture on Capitol Hill on February 3, 2022 in Washington, DC. The committee will discuss issues of workplace misconduct and the National Football League’s failure to take steps to prevent sexual harassment and verbal abuse within the WFT under the leadership of owner Dan Snyder.

Coburn, who also knew about the footage, told the committee that the “secretly made” video was “essentially a soft-p-rn video, soundtracked to Dan Snyder’s favorite bands.”

She also stated that after a drunken “awards trip” dinner she was invited to stay at Daniel Snyder’s home, but was told to stay in the basement “because the men had invited prostitutes back.”

“Daniel Snyder should not be managing any human beings,” Coburn added. “He needs to be held accountable for his actions.”

Johnston claimed at one point in her tenure working for Snyder she was “strategically” seated by Snyder at a work dinner so he could put “his hand on the middle of my thigh until I physically removed it.”

“That rot started at the top, with team owner Daniel Snyder, and it trickled down,” Krishnamoorthi said at the hearing. “Mr. Snyder claimed … that he was ‘unaware of these allegations’ and was simply ‘hands-off as an owner.’ Unfortunately, nothing could be further from the truth. And [NFL commissioner] Mr. [Roger] Goodell has engaged in troubling behavior as well. Goodell claimed in 2014 to embrace a ‘higher standard’ for the NFL … [but] the NFL deep-sixed the findings from its own investigations of the Washington Football Team.”

UPDATE: Daniel Snyder has issued another statement about the allegations against him

Statement from Dan Snyder, via his PR representative: pic.twitter.com/JGDsG1ouoP