Why Do Celebrities’ Homes Seem So Easy To Break Into? A Breakdown Of Recent Intruders 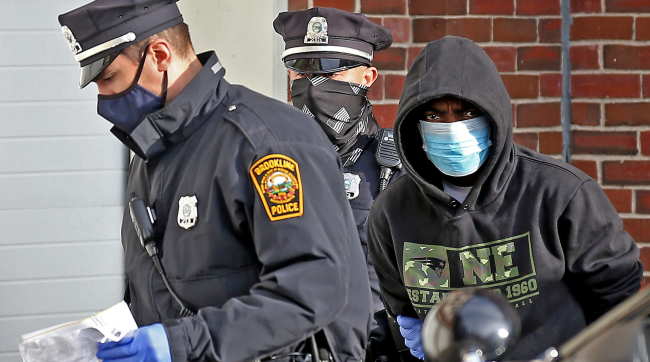 In case you didn’t hear, time traveler Johnny Depp’s house got broken into (again) by a random stranger who cops found taking a shower in one of Depp’s bathrooms after helping himself to some of Johnny’s booze and making himself a drink, according to TMZ.

This marks the second break-in of Depp’s home by an intruder in less than three months. The first intruder was a female (reportedly also possibly homeless) who busted into his place and took off before cops could arrive. (They later found the slippery trespasser nearby and arrested her.)

This follows on the heels of Pete Davidson’s home in Staten Island also getting broken into last week by a woman who claimed to be his wife (he’s not married), sat down at the kitchen table, and chilled until the police arrived to arrest her.

One would think that with all these intruders breaking into celebrities’ homes that they would install top-notch security systems, hire guards, and/or live in gated communities to stop it.

What’s that? Oh, most if not all of them already do those things? Hmmm…

So how are all these people just waltzing into so many celebrities’ homes? I mean, besides the trespassers obviously being much more wily and cunning than the average person, especially since more often than not they’re, like Depp’s latest intruder, homeless.

Let’s take a look back at some of our favorite celebrity home intruder stories of the past couple of years and see if we can figure it out.

Back in January, former SNL star Kevin Nealon had his home broken into by an intruder who swiped over $100,000 worth of jewelry and other valuables. After arriving on the scene, cops said they had no idea how the burglar got into the home.

Last week it was reported that some rando broke into Prince Harry and Meghan Markle’s Montecito home not once, but twice in three days over the holidays.

The 37-year-old man drove all the way from Ohio to do his dirty deed and got caught by the cops both times.

Also in December, NBA star DeMar DeRozan’s house was broken into by a 22-year-old male who walked into the home through a sliding glass door and hung out for around 17 minutes, shirtless, before DeRozan’s 7-year-old daughter ran into him and hollered for her dad who chased the man out of his house.

Turns out the intruder was actually trying to get to Kylie Jenner’s home but made a mistake.

Earlier that month, an intruder (pictured at the top of this article) broke into Tom Brady and Gisele Bundchen’s Brookline, Mass. mansion.

The 34-year-old homeless man was arrested after being discovered by police in the basement of the home “laying on the couch in the middle of the room.”

Speaking of great NFL quarterbacks, last September, NFL Hall of Famer Joe Montana confronted and subdued an intruder who tried to kidnap his infant grandchild at his home.

This intruder didn’t even do anything special to get inside. The 39-year-old woman just walked into the house and snatched Joe’s grandkid out of a woman’s arms.

Back in April of 2020, Eminem had to confront an intruder inside his Detroit-area home. A home in a gated community. A home where Eminem has his own security team.

The 26-year-old male suspect was discovered by the rapper himself in his living room after sneaking in through the back of the house to avoid said security team.

Also in April of last year, some random guy just walked into… oh wait… that time it was the celebrity doing the intruding. Never mind.

And that’s not even close to all of the times this has happened recently.

So, what’s the common thread here? How are so many intruders able to gain access to celebrities’ homes? Damned if I know. It just seems like it’s really easy to do.