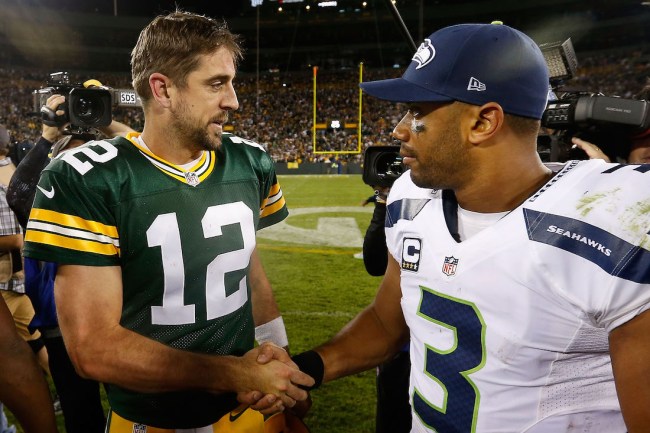 We’re all familiar with the Aaron Rodgers-Green Bay Packers drama that’s been going on for the past few months this NFL offseason. Early reports assumed that the reigning NFL MVP was unhappy with his contract, but, upon further review, the quarterback is upset with the organizational leadership.

While Rodgers has stayed mum about the situation — which is only adding to the problem — some believe that it’s only a matter of time until he returns to the Packers. But is it an inevitability? Absolutely not.

Given how passive aggressive Aaron Rodgers is, it’s not out of the question that he refuses to report to training camp, for which he’ll be fined. No one should count out the future Hall of Famer retiring, either, considering how he’s continued to hold firm in his stance against the Packers.

Regardless, if Rodgers forces his way out of Green Bay, his legacy will absolutely take a hit. Like other great players who have left teams, fans will revolt and immediately compare the quarterback to Benedict Arnold. It would be a travesty, and one that would only get better (potentially) long after his retirement. This is similar to how it went with Brett Favre back in the day with the same franchise.

Aaron Rodgers’ Legacy Is In Question

But it doesn’t have to be this way. In fact, if Aaron Rodgers just followed the PR blueprint set forth by Russell Wilson after his own drama earlier in the NFL offseason, any negative fallout could be avoided.

For instance, Wilson joined the Dan Patrick Show on Wednesday and discussed some of the reported issues he had with the Seahawks. Instead of avoiding the topic, he tackled it head on. He then went a step further by praising Seahawks head coach Pete Carroll, doubling down on their relationship.

Asked about his relationship with the Seahawks on the Dan Patrick Show, Wilson said it’s never been better.

“I would say it’s stronger. I think me and Pete have gotten closer. Pete and I have always had a great bond but I think we had a great heart to heart,” Wilson said. “Me and coach Carroll’s relationship is stronger than ever.”

Wilson said the Seahawks have had a great offseason and are eager to get back to the Super Bowl.

Want to know what Russell Wilson just did for himself? Earned brownie points with the Seahawks’ fanbase. He saved his legacy by basically saying, “I love playing in Seattle and have a great relationship with my head coach. I want to be here.” Whether the truth or not, it puts the onus on the front office to keep the perennial Pro Bowler in town beyond just the 2021 season. It gets the fans on his side, and, should he be traded or released in the future, it’s because of the team’s decision, not because of his wanting to leave.

If only Aaron Rodgers wasn’t so bullheaded, he, too, could look like a hero to Packers fans. Instead of running from the issues he has with Green Bay’s front office — or giving little hints about what’s making him upset — he could address them, say he’s happy, and, behind the scenes, have his agent try to get the team to ship him out of town. His legacy would be saved.

Instead, we’ve got people in the media like Cris Collinsworth and Adam Schefter actually role playing a “worst possible scenario” between Rodgers and the Packers. Take a look below.

.@AdamSchefter and I role play the worst-case scenario for Aaron Rodgers and the Packers. pic.twitter.com/6kZOtTFOEc

Until Aaron Rodgers stops acting so entitled and passive aggressive, his legacy with the Green Bay Packers will continue to be in flux. Despite a Super Bowl win, three league MVP awards and lots of other great moments, he’s making it difficult for the fans to root for him. That could all change if he only followed Russell Wilson’s lead on how to do damage control.