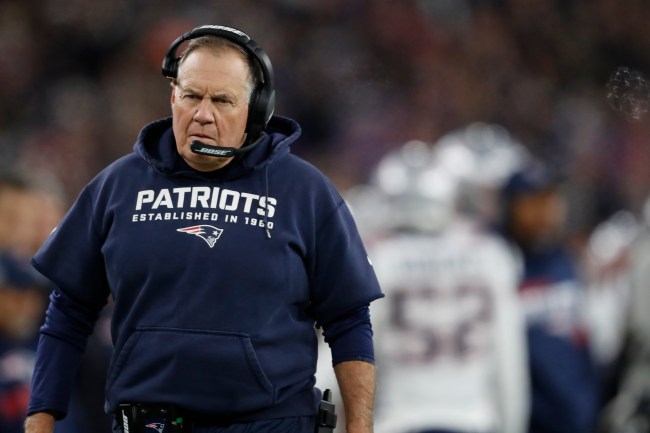 Bill Belichick has always done things his way. Hell, that’s part of the reason why that whole “Patriot Way” thing even started, as the future Hall of Fame head coach has an unorthodox way of running his team, motivating his players, taking chances on castoffs and, generally speaking, being sneaky good at keeping things close to the vest.

With six Super Bowl rings as a head coach, whatever Bill Belichick has been doing has worked. Sure, some of it has been questionable — like the whole Spygate or Deflategate controversies in the past — but do you really think the guy cares? In the words of DJ Khaled, Belichick’s back here being like, “All I do is win win win no matter what,” as he just keeps on racking up victories.

But, because Belichick and the Pats aren’t perfect, losses happen. And, when they do, even the way the head coach talks to his team afterwards is unique — which is something that former Patriots defender Chris Long recently spoke about as a guest on The Ryen Rusillo Podcast.

Admitting that, unlike other coaches, Bill Belichick doesn’t mince words or wonder if he’s going to hurt anyone’s feelings. Instead, the head coach holds every player accountable — something we’ve heard about him doing with a superstar like Tom Brady in the past — and makes sure that the entire team is present as he address players head on about what mistakes any of them made in a previous loss. Take a look below at Long’s description of team meetings with the Patriots following an L.

“It’s just straight up,” Long said on The Ringer’s “The Ryen Rusillo Podcast,” as transcribed by NBC Sports Boston. “That’s what you miss a lot in pro football. You want your head coach to get up there and call it how it is and do it in front of the entire team. No favorites. Don’t sugarcoat it. And that’s what’s done. In a room full of everybody that’s relevant in that building from a football standpoint. Your mistakes are up there on the big screen for everybody to see and they’re addressed head-on. That can be ugly, but it needs to happen.

“Too many coaches … split the team up. Offensive coordinator handles the offense. Defensive coordinator handles the defense. You would think, you assume, that everybody’s watching you every snap anyways. But to have that point hammered home, it really helps. That room is big and dark. There’s no windows in the building. Lotta coffee. Lotta guys with, like, big cups of coffee. Lotta guys shuffling in, no talking. Then there’s, like, the awkward quiet moment when you’re like, ‘OK, when’s Bill coming in,’ when the small talk stops. Then Bill comes in. And it can go for an hour.”

Considering NFL players are grown-ass men, it shouldn’t really be a shock that Bill Belichick treats them that way. While the Pats aren’t perfect — hey, nobody is — the head coach expects the entire team to be, from the first guy to the 53rd man on the roster. It’s that type of attitude and accountability that has led to nearly two decades of success in Foxborough.