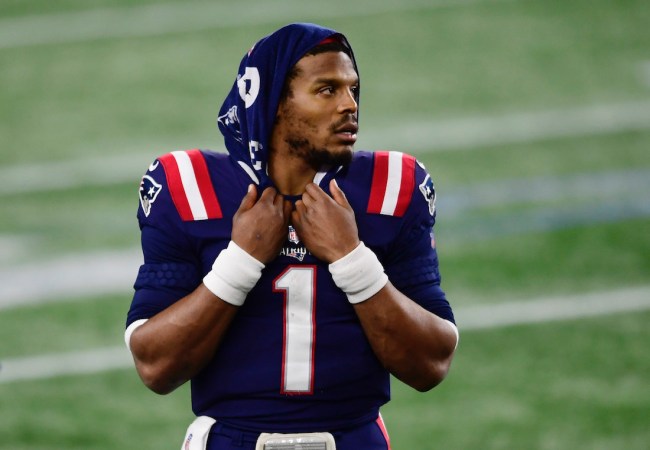 It’s kind of hard to believe that Cam Newton’s still only 32 years old. After being the No. 1 overall pick in 2011, winning an MVP award, helping guide his team to a Super Bowl during the 2015 season and now seeing where he’s at with the New England Patriots, it’s been a wild ride for the quarterback.

Following a series of injuries over the past few years, nobody knows for sure what kind of player Newton is anymore. Early in the 2020 season, Cam showed flashes of his dual-threat dominance, and ended his first year with New England with a total of 20 touchdowns — which included 12 rushing scores. But he’s paid to throw the ball, not run the ball, so the stats are a little deceiving considering the Pats struggled offensively all year long.

Entering his second year under Bill Belichick, Cam finds himself as the starter on paper, but, undoubtedly, will find himself locked in a tight battle with rookie Mac Jones to hold onto the role. Should Newton struggle in training camp — something we’ve sort of seen this NFL offseason — he could find himself either on the bench or without a team if the Patriots decide to cut him loose.

There’s a lot of uncertainty surrounding Cam Newton’s NFL future because no one knows how healthy he really is. But he’s trying to correct some fundamentals and improve his passing heading into the NFL season, which is why he’s working with his personal quarterbacks coach, George Whitfield Jr., who’s helping him try to get back to SuperCam.

Given the last couple of years and intense criticism Newton’s endured, the quarterback explained to Whitfield how he handles all the haters. In typical Cam fashion, it was both unique and a little confusing.

Per the Boston Herald:

“Simple… Feed your focus. Feed it. If the hate ain’t in my focus, I don’t feed it. I feed off of it, but I don’t feed it. It’s two different things. When I sense or when I dwell on hatred, that’s the product that’s going to come out — rage, anger. But that’s the hatred using me, not me using the hatred. So I want to process that and make that fuel me.

Essentially, Cam Newton claims he feeds off the hate, and tries to use it to his advantage as a player. Most great athletes do that — like Tom Brady, who creates a proverbial chip on his shoulder to inspire himself — so Newton’s strategy isn’t necessarily groundbreaking.

It’s that kind of focus that helps Newton reach his goals. And, like most successful people, the Patriots quarterback says he envisions himself achieving something prior to it happening, almost as if he’s manifesting it by putting in the work.

“You’ve got to visualize yourself already there. Get your mental thought of being in that moment and taking your place there,” Newton said. “And once you get there, find so much distress that you can gutter up and feel comfortable in it. Whenever that is. And that’s how you grind. You know what I’m saying? Just take your mind to that place, stay there, get uncomfortable, and be comfortable with being in that position.”

But at 32 years old and a recent history of injuries, it’ll be interesting to see how Newton performs coming out of this NFL offseason. It might not be do-or-die for him, but it sure feels like it. So he’s going to have to utilize his philosophy on dealing with haters to prove that he’s still the quarterback most of us remember him to be.