Donald Trump ‘Absolutely’ Supports Colin Kaepernick Getting Another Shot At NFL, But Only If He Earns It 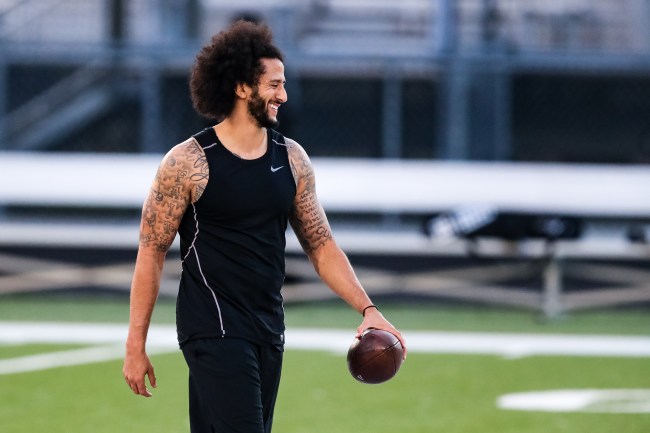 If you haven’t noticed, and I’m sure you have, Colin Kaepernick’s name continues to be a hot topic of conversation these days. The former San Francisco 49ers quarterback, who was all but blackballed by the NFL for kneeling during the national anthem prior to games starting in 2016, has many wondering if he (rightfully) deserves another crack at joining an NFL team now that the Black Lives Matter movement is (rightfully) at the forefront of our country’s minds.

Remember, it’s this very issue, specifically police brutality, that triggered Kaepernick to kneel in the first place, with the former signal-caller pleading for change following senseless killings by cops of seemingly targeted black men. While it’s uncertain whether or not any NFL team will take a chance and actually sign Colin Kaepernick, it’s good to see that he’s at least getting talked about as an option — something that hasn’t been the case over the past few years.

While Kaepernick has yet to get an apology from the league, which probably won’t happen following the ugly settlement that went down between himself and the NFL in 2019, Roger Goodell at least published a video giving a current statement regarding the league’s positioning, while apologizing for not listening to players’ silent protests years ago. It’s definitely a change in tune from the Commissioner.

Another guy who might be changing his thoughts on Colin Kaepernick? President Donald Trump, who recently spoke to the Chief Political Correspondent for ABC7, Scott Thuman, saying he’s fully supportive of the quarterback getting another chance in the NFL; but only if he truly deserves it. Take a look below at what Trump said below in response to Thuman’s question about Kaep.

"Absolutely I would," support @Kaepernick7 getting a 2nd shot in the @NFL — @POTUS in my interview today on racism, policing, statues & yes–sports. #ColinKaepernick pic.twitter.com/0B83cNbesW

Who knows if this is some BS spewing from President Trump’s mouth as a way to publicly look better amidst the ongoing protests or not? Politics aside, let’s take him at face value and go ahead and claim he truly believes this — which, if that’s the case, it’s obviously a good thing.

Of course, Trump did fuck up a few things in his reply — like how Kaepernick “was terrific in his rookie year,” which, had he been a little better educated, the President would’ve known the quarterback didn’t play his first season — but, let’s just assume he was referring to the first season the quarterback actually played. Small details, right?

Either way, with Trump recently showing support for Kaepernick, similar to how Goodell recently did, maybe the quarterback has enough support to prompt a team to give him a serious look. We’ll have to wait and see how all of this unfolds, but it’s starting to look like the quarterback is getting lots of attention as he works hard towards a return to the league that’s shunned him.