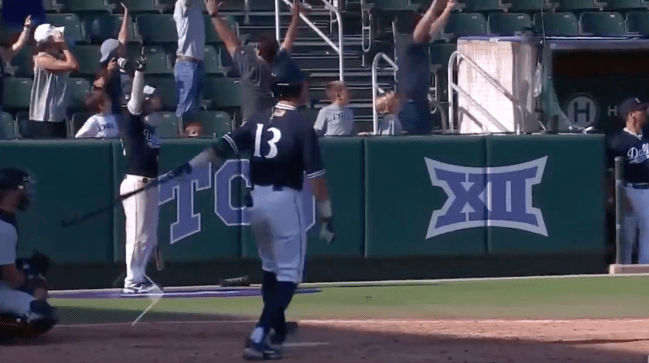 I have said it before, but I will continue to shout it from the mountaintops— COLLEGE BASEBALL IS THE BEST FORM OF THE GAME!

In no other sport can you find dudes hitting grand slams with a torn ACL, hilarious wall-crashing blunders, sassy ejections sparking comeback wins, and psychopath pitchers talking to themselves on the mound. Crazy things always happen and you will never find celebrations more vicious. It’s what makes the game fun.

Guys are sending their bats to the moon, trolling their own school’s football teams and breaking out the home run sledgehammer. The atmosphere is loud and passionate, and in the SEC, baseball is a revenue sport. Did I mention that it’s just downright fun?

Well, one particular umpire hates fun and told a Dallas Baptist hitter to stop watching his massive grand slam during the biggest game of the year. He’s a Grade-A weenie.

Dallas Baptist, out of the Missouri Valley Conference, played its way into the final game of the NCAA Tournament Regional at Fort Worth over the weekend. TCU, the host team, was eliminated and Oregon State was DBU’s last challenger. The winner would advance to the Super Regionals, the loser would have its season come to a close.

Well, the Patriots fell behind 5-2 in the seventh inning. Momentum was entirely in favor of the Beavers, but that’s why college baseball is great. Things can flip in a moment’s notice and that’s exactly what happened. They went on to win 6-5 on a BIG home run blast.

DBU worked the bases loaded with two outs, bringing Andrew Benefield to plate. He took the first pitch he saw DEEP to left field. It was not only a big spot to hit a grand slam, but the home run was huge in a literal sense. It might still be in orbit.

Benny hits a grand slam on the first pitch of his at bat and DBU has the LEAD!
pic.twitter.com/BRlD0owz6t

The team’s dugout exploded and, as Benefield rounded third, looked ready to join him for a big celebration at the plate. He had just hit a go-ahead grand slam in an elimination game. It deserves to be celebrated and celebrated loudly.

Instead, the umpire held the team back from meeting their teammate. Lame. 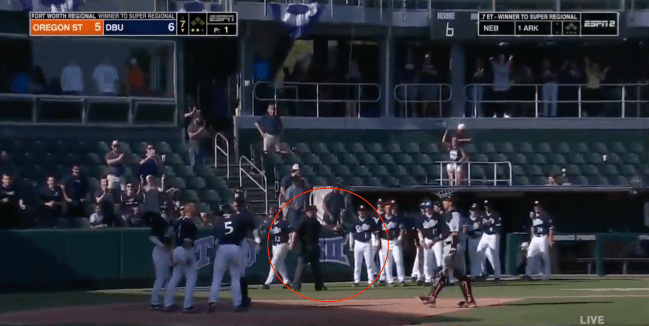 Unfortunately, it gets worst. Another angle of Benefield’s moonshot showed the ump intervene again. After the redshirt freshman made contact, he stood at the dish and watched his ball go approximately 100 million feet over the wall.

As he was gearing up for a bat flip, ole blue told him to get on his way and round the bases.

You will NOT admire your home runs with this umpire pic.twitter.com/6ivfTYbDg1

This umpire is the worst. As baseball tries to build its brand, this is not the way to do it. Bat flips are fun. Staredowns are fun. Home plate celebrations are fun. Baseball CAN BE FUN, so long as umpires like this guy aren’t there to take that away from us.