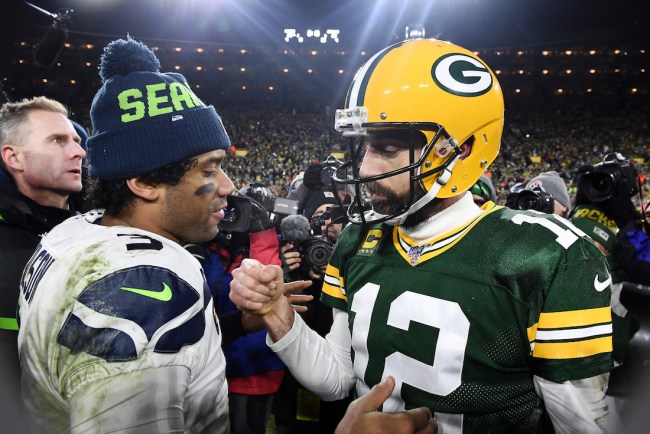 Deion Sanders was one of the most electric athletes of all-time, with the Hall of Fame defensive back never holding back in talking trash or showing his personality. Known on “Neon Deion” during his playing days, the current head coach at Jackson State has always been outspoken, often generating attention everywhere he goes.

While some may consider Deion to have been a prima donna during his NFL career, the 53-year-old took some time to call out a few current NFL quarterbacks who thinks fits the bill.

Recently talking to NFL Total Access, Deion Sanders took aim at superstars like Aaron Rodgers, Russell Wilson and Deshaun Watson, all of whom have had their drama this NFL offseason. Whether it’s Rodgers’ unhappiness with the Packers, Wilson’s reported displeasure with the Seahawks or Watson’s issues with the Texans (prior to numerous sexual assault allegations), Sanders says there’s one man to blame for making these quarterbacks so upset: Tom Brady.

According to Deion, Rodgers, Wilson and Watson see the success Brady had after leaving the Patriots during the 2020 NFL offseason — immediately winning a Super Bowl with the Buccaneers — that it’s caused each to become a bit jealous. In fact, Sanders straight up said the three stars are “trippin'”.

“OK, so, what is it with these quarterbacks? It seems like when you give them 35 million and over, they start trippin’. You’ve got everything you want and you still aren’t satisfied. I understand that we could all say, ‘Well, they don’t give him what he wants down in Green Bay.’ Well, you’ve been 13-3 for the last two seasons. You’ve got to be getting something right. They’re doing something profound.”

It’s hard to argue with Deion’s assumption here. After all, Brady played most of the 2020 season at 43 years old and still played at a high level, ultimately leading the Bucs to a Super Bowl win over the next great superstar quarterback, Patrick Mahomes. It certainly caught the attention of some of his peers.

As for Aaron Rodgers’ situation, Deion Sanders says he hopes the standoff between he and the Green Bay Packers ends soon. The NFL great thinks Rodgers is good for the game, and, as a future Hall of Famer, is one of the best to ever play.

“I hope it works out because he’s great for the game. I love who he is on the field. I love what he brings to the table. I think he’ll still go down in history as one of the best to ever play. But I think when Tom Brady — not I think, I know — when Tom Brady won the last championship, all quarterbacks went into a frenzy,” Deion posits.

“They just start trippin’. I mean, it’s unbelievable. And you can fault Tom for that. Tom is so dominant that every other quarterback gets insecure about what they have in house. And Tom Brady has never tripped.”

There are a lot of things that make Tom Brady different than most athletes. One of those things is the way he always seems to stay cool and collected — even under the most intense situations. In Sanders’ words, that’s allowed him to avoid trippin’ over certain things. But that’s easy considering he’s the GOAT… even it it makes him cringe hearing the term.

Other stars like Rodgers, Wilson Watson and others see Brady’s success and are no doubt a little jealous. Mix that frustration with competitiveness and, well, you get what Deion Sanders calls straight “trippin'”.