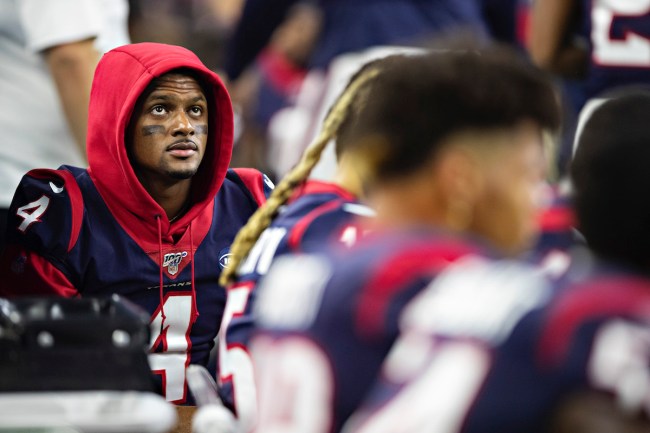 Deshaun Watson’s trade request from the Houston Texans has been… a process. The Pro Bowl quarterback clearly wants out, and is focused on doing anything he can to make that happen — even reportedly willing to sit out regular season games. Now, for their part, the organization has shut down any discussion regarding a trade, saying the right things publicly about the former first round pick not being available.

But then the team’s new head coach, David Culley, decided to talk to some media folks over the past couple days about the Deshaun Watson trade request. How’d it go? Less just say, well, less than stellar.

It all started on Wednesday with Culley hinting to Jim Trotter of NFL Media that the Texans were, in fact, willing to trade their disgruntled quarterback, with the reporter saying he “firmly believes” that Watson will be traded sometime this NFL offseason based off his conversation with the head coach.

Fast-forward to Thursday, and David Culley seems to have changed his tone a bit about all the Deshaun Watson trade request. While he never blatantly said the Texans would trade the quarterback during the conversation with Trotter, while doing a general press conference on Thursday with a larger group of media members, the coach said this: “We are very committed to Deshaun as our quarterback.” See more analysis below, via Pro Football Talk.

Culley also said that there’s no contingency plan if/when Watson goes, because Watson is the quarterback. Culley likewise said, as to the notion that Watson wants out, it’s “not a matter of me trying to change anybody’s mind.”

Although Culley declined to comment on his conversation(s) with Waston, Culley said this when pressed on Watson wanting out: “I don’t know about him not wanting to be a Houston Texan.” Culley separately said that Watson is committed to being a Texan. (When pressed to explain that, Culley said several things but not, “He told me so.”)

So what gives? Who really knows? But it’s just another sign that things between Deshaun Watson and the Texans are dysfunctional, and messages are being crossed. It’s part of the reason why the perennial Pro Bowler wants out of Houston, and why he’s voiced his unhappiness with the leadership with the entire organization — from ownership to the front office to the newly-hired coaching staff. The level of incompetence is shocking.