Everything You Need to Know About Poirier vs. McGregor 3 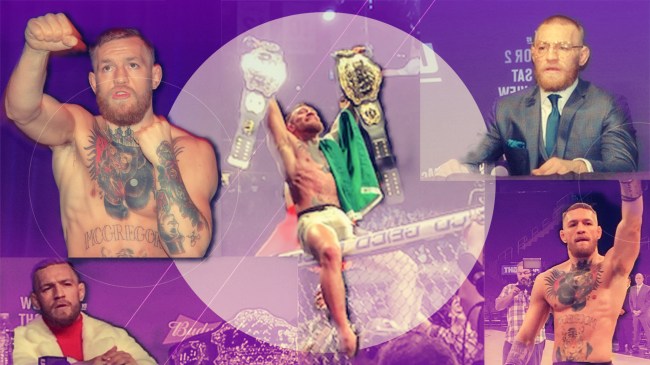 Presented in partnership with UFC 264 via ESPN+

It was only a matter of time before the trash talk went off the rails.

With “The Notorious” Conor McGregor arriving in Las Vegas for his third bout against Dustin “The Diamond” Poirier at UFC 264 (July 10, 7 p.m. PST / 10 p.m. EST on ESPN+), the stage is finally set for the biggest trilogy in UFC history.

Entertaining fans with one last press conference before the UFC 264 PPV main event on ESPN+, McGregor went full villain ahead of the trilogy, insulting Dustin with the “Peahead” and “Hillbilly” taunts before shifting his attention to Poirier’s wife.

The whole episode, while not uncommon for McGregor, was in stark contrast from his near silence leading up to UFC 264. Then again, it was really no surprise or shock that Conor would make a few valiant attempts at engaging in some mental warfare ahead of the biggest fight of 2021.

While it’s still unclear if McGregor rattled Poirier, shaking Dustin’s psyche, we’ll ultimately know on fight night, when these two enter the Octagon for the third, and last, time.

So, with just about a day remaining until UFC 264, it’s time for this comprehensive rundown of all the major plots and storylines heading into Poirier vs. McGregor 3. It’s the perfect primer for all you filthy casuals out there.

Poirier vs. McGregor: The History

The trilogy between Dustin Poirier and Conor McGregor dates back to 2014, when “The Notorious” starched “The Diamond” in less than two minutes at UFC 178. The win was a major coming out party for McGregor, who was making his debut in Las Vegas at the time. And, while McGregor went on to run through the featherweight division, and ultimately claim two simultaneous titles en route to a boxing super fight against Floyd Mayweather, Poirier took the slow path up the lightweight ranks, eventually capturing the interim title in April 2019.

Six years after their first fight, McGregor and Poirier agreed to do it again, this time on Fight Island, after initially agreeing to a charity boxing match.

The second fight was a complete contrast to the first bout. Not only did McGregor play the role of polite and humble UFC elder statesman in the leadup to the fight, but Poirier was the one with his hand raised in the end, finishing Conor via strikes in the second round.

With their series tied at one win apiece, Poirier and McGregor will now step into the Octagon for the third time and settle their rivalry in the UFC 264 main event.

Poirier vs. McGregor: The Stakes

While there is no title on the line at UFC 264: Poirier vs. McGregor 3, there is a lightweight title shot against current champion Charles “Do Bronx” Oliveira hanging in the balance. So, overall the stakes for the UFC 264 PPV main event on ESPN+ are extremely high.

However, there are even greater stakes for both McGregor and Poirier.

For “The Notorious,” who has never lost consecutive MMA fights, a win at UFC 264 is essential, mainly because it’s likely his last chance to maintain relevance in the lightweight title picture.

Five years ago, McGregor looked unstoppable, but in 2021, after all the distractions with boxing and the law, “The Notorious” is desperately in need of a win to maintain his value and stock in the fight game.

No doubt, McGregor will continue to be the biggest name in mixed martial arts for quite some time after UFC 264, but it’s only with a second win against Poirier that he’ll be able to continue earning at the same clip that made him the Forbes’ highest earning athlete of the year.

Conversely, for Poirier, the stakes at UFC 264 are increased given that he passed on an opportunity to fight for the undisputed title in favor of the McGregor trilogy. If Poirier ever wants the world championship that he’s always coveted, he’ll need to get it done against McGregor at UFC 264.

Poirier vs. McGregor: The Stats

Poirier vs. McGregor: The Analysis

What a fantastic fight we’re about to witness at UFC 264.

Both Poirier and McGregor have clear paths to victory, and the anticipation for the fight is massive.

Without oversimplifying the technical side of mixed martial arts, the gameplans for Poirier and McGregor will likely mirror their previous fights.

Known as one of the fastest starters in mixed martial arts, McGregor will be looking for the “kill shot” early and often. However, unlike the second fight, McGregor will need to abandon his straight up boxing stance in favor of the wider karate base that he employed during his championship run.

By his own admission, McGregor stated that his last camp for Poirier was really more of a training camp to box Manny Pacquiao. So, with boxing out of his system for now, McGregor will need to use his reach, range, and movement to keep Poirier guessing. From there, it’s all about precision and timing, you know, because Conor said they top power and speed.

Technically, for Poirier, his game plan at UFC 264 should be quite similar to how he defeated McGregor at UFC 257.

The more well rounded MMA fighter of the two, Poirier has the offensive wrestling and ground game to give McGregor fits on the mat. He also has creative striking combos (not to mention those calf kicks) to batter and tatter McGregor in the later rounds.

And, while McGregor’s likeliest path to victory comes via an early knockout, Poirier has the arsenal to finish the fight via knockout, submission, or decision. He’s also known to be lethal in any round.

Poirier vs. McGregor: The Undercard

Poirier vs. McGregor 3 isn’t the only worthwhile fight on the UFC 264 card. Sure, it’s the biggest trilogy fight in UFC history and trending to be one of the top selling PPVs of all time, but look no further than the co-main event between Stephen “Wonderboy” Thompson and Gilbert Burns for another high level fight with plenty of stakes.

Actually, the undercard, while not completely stacked, still has a number of really excellent names and fights. So, don’t forget to tune in to the beginning of the UFC 264 PPV main card on ESPN+ to catch “Sugar” Sean O’Malley vying for yet another highlight-reel knockout.

There are also three killer fights on the UFC 264 prelims, all of which should deliver tons of action.

Now, start your engines because UFC 264 fight night is upon us.