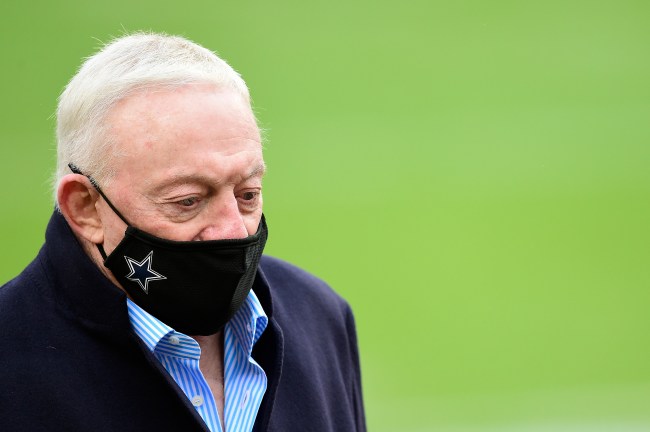 It’s been a rough season for Jerry Jones’ Dallas Cowboys, with the team struggling all season long and currently finding itself at a pathetic 2-7. Even with the miserable NFC East, “America’s Team” has failed to take advantage, and haven’t been able to stop anybody when on defense, have experienced plenty of drama inside the locker room, and saw their starting quarterback go down with a devastating ankle injury. Add that all up and you get a bad football team.

Yes, the situation in Dallas is way worse than anybody wants to admit — especially Jerry Jones and his son Stephen Jones — so it’s not out of the question to wonder what might come next for this franchise. Will they fire head coach Mike McCarthy after just one season? The Jones’ are still backing him, so he’s probably safe. What will the team do to upgrade the defense? And, more importantly, who’s going to be the starting quarterback next season?

That last question is something that Jerry was asked on 105.3 The Fan on Tuesday morning, with the host simply wondering if the Cowboys would think about choosing a top flight quarterback prospect in the 2021 NFL Draft.

Is it crazy to think the Cowboys could take a quarterback if they have one of the top picks in next spring’s draft? Yes,” Jerry Jones said on 105.3 The Fan in Dallas. “You’re asking me is it crazy to bring the idea up and I’m answering it, yes. We’re… https://t.co/nmP4WyZdFw

“You’re asking me is it crazy to bring the idea up and I’m answering it, yes. We’re playing games here guys, but it’s not the thing to be talking about here at all. You know, Dak is our quarterback.”

I mean, you’ve got to take Jerry Jones at face value here, but, c’mon, there’s no way in hell the 78-year-old can say with conviction that Dak Prescott will be his starting quarterback next season. There are just too many unknowns — like how Dak recovers, what his contract looks like and if he’s even the same player he’s shown to be the first few years of his career. So Jones is simply toeing the company line here with his answer.

Still, it’s hard not cringing at what the Cowboys are rolling out there under center right now, with names like Ben DiNucci and Garrett Gilbert both getting starts for the proud franchise. With the team currently sitting in the No. 4 spot in the 2021 NFL Draft, what if Jones somehow has the chance to snag a player like Trevor Lawrence or Justin Fields? Would that change his opinion on the quarterback situation next season? Probably so.

Who knows what the hell is going to happen with the Cowboys moving forward, because, as mentioned, the team is a complete mess. But Jerry Jones can’t say definitively that Dak Prescott’s going to be his starting quarterback next year, nor should he get so frustrated when asked the obvious question about the future of the position for the team. A lot can change between now and next September, especially with all the variables involved — where the Cowboys end up drafting, the contract proposal they give Prescott, etc.