J.J. Watt Trade Rumors Are Absolutely Swirling Right Now, So Could The Texans Trade The Future Hall Of Famer? 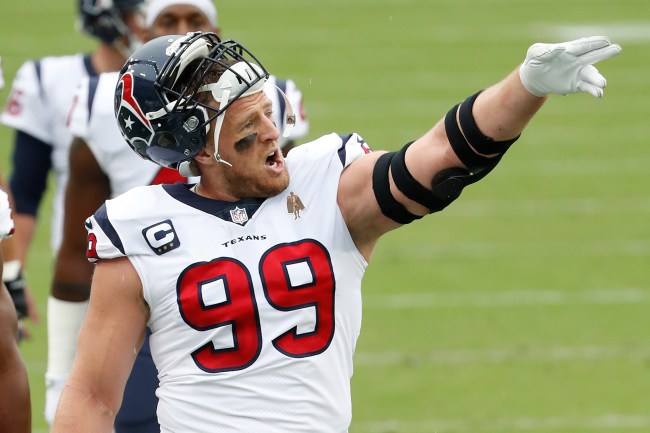 What the hell is going on with pro football in the state of Texas right now? The Houston Texans are an abysmal 1-6 and have already fired a head coach, and the Dallas Cowboys are a dysfunctional 2-5 at the moment, with rumors about the team already waving the white flag and giving up on the season. This isn’t how it’s supposed to be in the Lone Star State.

Unfortunately, here we are, with the Texas teams embarrassing themselves pretty much weekly at this point. And given what’s going on, it’s no surprise that both teams are starting to poke around the idea of trading away some players.

But is future Hall of Famer J.J. Watt really one of those guys who could be traded away by the Texans prior to the NFL Trade Deadline on November 3? Recent rumors seem to suggest so, with teams like the New Orleans Saints and Seattle Seahawks mentioned as possible destinations.

“The way things stand, the Texans don’t pick until the third round in the 2021 draft. Houston doesn’t have a lot of options to acquire significant draft capital. Watt presents one chip, though. He averaged eight games per season from 2016 to 2019 but is healthy this year and has played well. One option would be to pay Watt $17.5 million next year and hope he stays healthy for a team that contends for a Super Bowl. The other would be to sell high now and acquire much-needed draft capital. Given Watt’s age (31) and injury history, a first-round pick seems unlikely. But could the Texans get a second and a third from a needy team that’s ready to win now? Maybe.”

As the report mentions, despite J.J. Watt’s history of excellence, which includes three NFL Defensive Player of the Year awards, his age (31) and injury history suggest he may not warrant a huge return for the Houston Texans. Still, with the team having little assets after former head coach and GM Bill O’Brien pretty much stripped the pantry before getting canned, the team may look to salvage multiple second- and/or third-round picks.

Hosts of the Locked on Seahawks Podcast, Corbin Smith and Rob Rang, suggested the Seahawks front office tries to swindle their way into acquiring J.J. Watt, pretty much addressing the elephant in the room: That Houston needs as much draft capital as possible to rebuild.

“You get the sense that when you look at what JJ Watt is going through, he’s 1-6 in Houston, he’s not getting any younger, he’s had some injury issues,” Smith said. “I know he loves the city of Houston, but you’ve got to wonder if the opportunity was there for him to go to a team like the Seahawks that’s clearly one of the front-runners in the NFC and their biggest need is his position.

“You’ve got to wonder if that would at least be something that John Schneider would call the Texans about saying, ‘Look you guys are going to be rebuilding and you need draft picks.’ Maybe they would consider doing it. Now that particular deal though would leave you with just three draft picks and no picks till the fourth round.”

It’s hard to imagine J.J. Watt playing for any other NFL franchise given all that he’s meant to both the Texans and the city of Houston over the years. But we all know that the league is a business, and with the ineptitude of his current team, the five-time First-team All-Pro should happily accept a trade should the front office find one they like. He deserves a fresh start and a chance to win a Super Bowl, because wasting away his final few productive years in the league doesn’t help anybody.