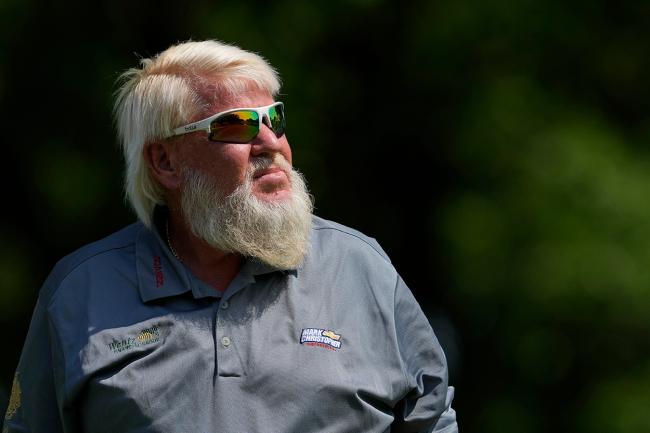 John Daly always seems to be up to something and it’s never short of exhilarating. The 56-year-old golf legend is known just as much (if not more) for his shenanigans as he is for his play.

Daly, who recently said that he would play better on the PGA Tour if he was allowed to compete barefoot and drunk, never shies away from a party— even if it means leaving the hospital after a stroke and getting after it. He has won both the PGA Championship and The Open Championship during his long career, but recently it has been more about competing to compete rather than win.

Over The Masters weekend, Daly partied it up at Hooters and jammed out with Hootie and The Blowfish. Not long thereafter, he hit up Hooters and the casino after an impressive showing at the 2022 PGA Championship.

Two weeks later, Daly dominated Memorial Day Weekend by laying all of the way out on a textbook belly flop. On Tuesday, he was back with a golf club in his hand but did not fail to go full-send once again.

In a video that has since gone viral, Daly is positioned in the corner of a parking lot— barefoot, of course. He tees up a ball and proceeds to rip his driver with a massive swing.

The ball, which was absolutely smoked, proceeds to fly over a busy highway and onto a football field across the way. It was a moonshot.

John Daly hitting drivers over a highway and onto a high school football field in Akron, OH pic.twitter.com/jfKbWsUGB5

Had Daly missed, the drive could have easily taken out a windshield or caused a massive pileup. But Daly doesn’t miss.