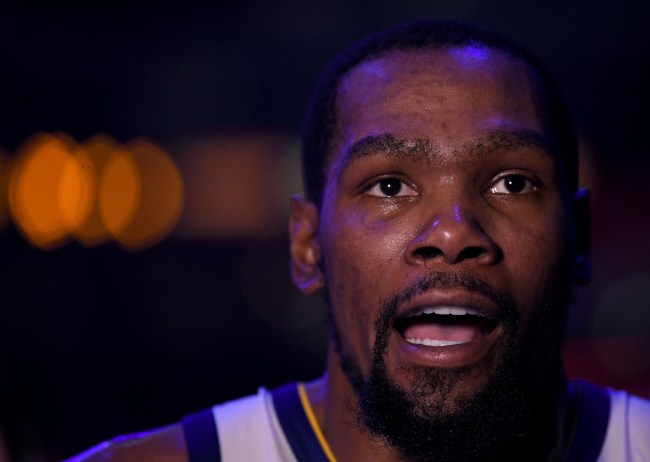 Kevin Durant has had a busy offseason since tearing his Achilles in the NBA Finals over the summer. From having surgery, to rehabbing, to, you know, that whole leaving the Golden State Warriors for the Brooklyn Nets thing, KD doesn’t seem to have much free time. But when he does? Well, naturally, he’s on social media like the rest of us.

We saw that the other day when Kevin Durant was seen interacting with a bunch of people on Twitter, with the two-time NBA champ engaging in back-and-forth conversations with people who, generally speaking, shouldn’t impact Durant’s daily life. Oh, but we all know KD is as sensitive as they come, so he wasn’t going to miss his opportunity to talk to some of the trolls (and fans) on there.

While Durant did get a little hostile with some of his interactions, in most cases, he was just giving an honest opinion or answer to things. Hey, much respect to that, because most athletes wouldn’t even open themselves up for this kind of criticism from people, so I guess he should be commended for that.

Once instance of Kevin Durant being mega candid came when a fan asked him about being in the GOAT discussion, with the one-time league MVP shooting down the whole comparison game, while saying that being the GOAT doesn’t motivate him. Take a look at the exchanges below.

Everybody gets compared to everyone and no one will ever get the GOAT title outright, especially on social media so does it really matter in the grand scheme? Or do u just wanna argue real quick?

He did ask me a solid question. Stop hatin

Everybody gets compared to everyone and no one will ever get the GOAT title outright, especially on social media so does it really matter in the grand scheme? Or do u just wanna argue real quick?

It’s no point. There’s literally millions debating this daily. Who has the final word? No one knows, it’s just barbershop/social media talk anyway. Good conversation for the moment

U wanna put together hypotheticals for every great player? I can make sure everybody has rings if we did that.

Being The GOAT isn’t something that moves me.

Of course, this can be taken one of two ways. On one side, it’s cool that Kevin Durant understands that all this debate is pretty much nonsense. Like, seriously, is Michael Jordan the GOAT? Is LeBron James the GOAT? Is someone who played in a different era — like Bill Russell or Wilt Chamberlain — the GOAT? It’s all opinion, and KD doesn’t care to entertain the idea.

But, because it’s Durant and he’s shown to be so sensitive during his playing days before, some people could look at this as him not being motivated, or having that killer instinct that guys like Jordan or Kobe Bryant had. Rather than be rational, some may turn it into a negative, thinking KD lacks that second gear. To those people, Durant probably laughs at, because he’s clearly shown he’s got that superstar gene.

It’s interesting to see Kevin Durant continue to interact with fans on social media, so here’s hoping he keeps it going.