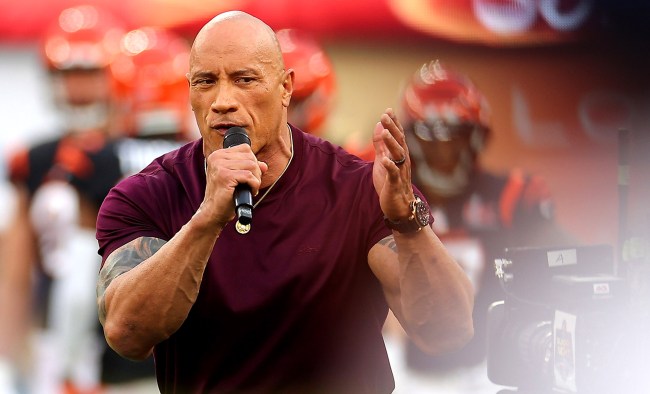 Super Bowl LVI provided numerous surprises and intense moments for both those in attendance as well as those watching on TV at home, in bars, or wherever.

Joe Burrow limping off the field, Odell Beckham Jr. tearing his ACL for the second time, and Cooper Kupp’s clutch game winning touchdown were among the story lines featured in the game.

It also gave us several bizarre moments like Joe Burrow introducing himself to everyone on the field – during the game and Rams wide receiver learning that his wife had been stretchered out of the stadium to give birth.

Oh, and that odd commercial with LeBron James going back in time to tell himself… something.

Also, like many people watching just before the kickoff, several mic’d up Rams and Bengals players were left wondering why Dwyane “The Rock” Johnson was giving a motivational speech before the start of the Super Bowl.

Bengals and Rams players and staff were confused by The Rock

Cincinnati Bengals coach Zac Taylor couldn’t help but chuckle to one of his assistant when The Rock dropped a “Finally, the Super Bowl has come back to Los Angeles!”

“Is that The Rock?” his assistant asked him, having obviously not watched TV or a movie, read a magazine, or been on the internet in a decade or so.

“What is he doing out there?” Bengals quarterback Joe Burrow asked backup QB Brandon Allen on the bench.

Allen muttered something back to Burrow, who then responded, “He’s on kickoff returns? They signed him?”

Over on the Los Angeles Rams’ sideline, someone came up to Aaron Donald during The Rock’s rousing speech and said to him, “That’s going to be you in 10 years… your acting career.”

After The Rock finished up by shouting at everyone “It is time for the Super Bowl!” Burrow informed Allen, “I like his shoes.”

Related: Dwayne Johnson Shares Important Update About Plans For His Reboot Of The XFL

My long time dream was to have a career in the @NFL & win a #SuperBowl.
I failed at that.
But last night my dream came true..
in a different way ☺️
Thank you NFL, players/coaches for the amazing love & trust.
Thank U fans 🌍 for the INSANE POSITIVE ENERGY 🤯🤯🔥🔥 🎤#grateful🙏🏾 pic.twitter.com/TDXl1nziTZ

Yep, @JoeyB talks to himself on gameday.pic.twitter.com/y22KjN2zMD

"I get a zit right on the middle of my lip. Day of the Super Bowl, unbelievable."

Joe had his priorities in order at kickoff.