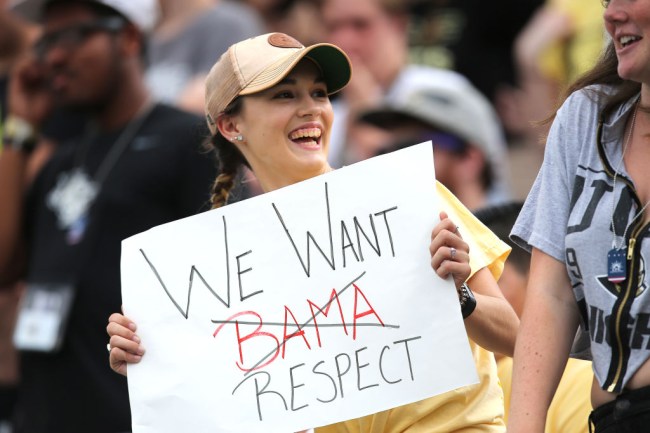 The University of Central Florida’s 22 game win streak is not impressive enough to convince sports books that they’d have a snowball’s chance in hell against college football’s best.

The Knights are fresh off a 13-0 season and a victory over Auburn in the Peach Bowl and gosh darnitt if no one was going to crown them national champions, they would do it themselves. Following the victory, UFC held a parade and raised a banner, bought its players some shiny rings, commisioned a special edition police car, and even convinced the state of Florida to create a custom license plate to commemorate their “achievement.”

UCF have picked up right where they left off, currently holding a perfect 9-0 record. They are number 11 in the AP Top 25 poll, and feeling quite high on themselves. Oddsmakers aren’t as convinced with UCF’s superiority complex. A hypothetical line released by Todd Fuhrman via Dave Mason of BetOnline.ag suggests that Alabama, the runaway number 1 team in the country who smacked number 10 LSU 29-0, would ruin UCF.

BetOnline from posting an Alabama-UCF betting line Sunday. Any wagers will be graded as no action unless the two meet in the national championship game. But the posted line, which you can actually bet, is Alabama -31.

The primary reason for the huge number is UCF’s defense, which gave up 670 yards and 40 points to Temple two weeks ago.

This needs to happen.