Pat Riley Admits He’s Thought About A Los Angeles Lakers Return, But The Team Seemed To Drop The Ball 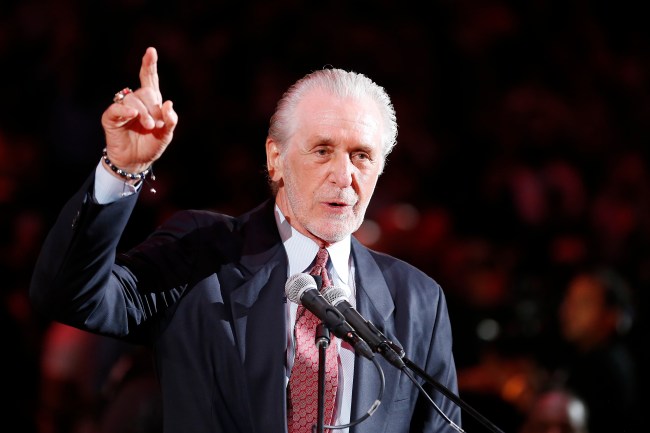 Pat Riley is one of the most influential and successful people in all of basketball. Following an NBA playing career, which saw him win a championship in 1972 with the Los Angeles Lakers — Riley went on to become royalty on both the sideline and in the front office, adding seven more rings between coaching and running a team as an executive. Remember, it was Pat Riley who assembled the “Heatles” in 2010, bringing together LeBron James and Chris Bosh with Dwyane Wade on the Miami Heat, so the dude’s resume is pretty impressive.

Unfortunately, even with everything that Pat Riley has accomplished, it’s not impressive enough to get a call from the Los Angeles Lakers for their executive vacancy following the surprising departure of Magic Johnson a couple months ago. While there had been rumors about Riley returning to the Lakers — a team he won four titles with as head coach of the Showtime Lakers with Johnson running the point — things never materialized.

Talking to ESPN‘s Jackie MacMullan, Pat Riley admitted that he’s considered a return to the Lakers, but the team never even contacted him.

There were murmurs that Jeanie Buss, whose blueprint has been to surround herself with people her father knew and trusted, had reached out to Riley in an attempt to coax him back to the West Coast in some front-office capacity. Riley shot down that notion on Monday. ”I have thought [about returning to the Lakers] only from a sentimental standpoint,” Riley said. “But I was never pursued by them. Nobody officially contacted me. I have about 20 friends wishing I would come back, but nobody asked.

It kind of sounds as if the Lakers dropped the ball here. Not only is Pat Riley one of the top executives and savviest minds in NBA history, but he’s also got a relationship with both the Lakers and, more importantly, LeBron James. The fact that the team never even inquired just goes to show how dysfunctional the entire process is right now. It’s something that Riley even mentioned to MacMullan, saying that the power struggle in the front office is a sticky situation.

“They had Magic. When you are in the position that Earvin was in, when you turn over the organization to somebody like him, there’s only one person who can say no to you. That’s your owner. It’s the same for me here in Miami. If [Heat owner] Micky Arison says no, that’s it. Now, that doesn’t mean I don’t have power.

”But when others find a way to gain influence to do this or say that, it gets a little dicey.”

As of right now, the Los Angeles Lakers are rolling with Rob Pelinka as their general manager and the person with the second-most power to make decisions who’s not-named Jeanie Buss, the team’s primary owner. Given the reported bad reputation of Pelinka — with Stephen A. Smith going as far as saying that he’s “despised” by some in the league — as well as the added drama from Magic Johnson saying he felt like he was “backstabbed” by Pelinka, well, it’s an interesting choice to go with him as the voice to pitch upcoming free agents.

Sure, there’s no guarantee that Pat Riley would have been interested in actually leaving the Heat for the Lakers, but, damn, to not even contact the guy is insane. No wonder the franchise appears to be unstable right now.