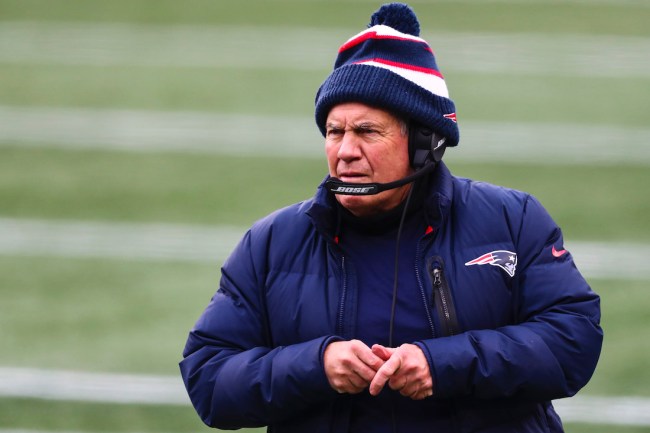 If there’s one thing we know about Paul Finebaum, ESPN’s resident boomer, it’s that the guy will never sit on his opinions. I mean, c’mon, the dude is known as the “Mouth of the South” for a reason, and always speaks his mind in order to get a rise out of anybody willing to listen to him.

While Finebaum’s made a living with his coverage of the SEC, since the 2021 NFL Draft’s going on, ESPN leaned on him for some analysis of a few of the high-profile players getting plucked by NFL teams. Naturally, people wanted to hear his opinion on Mac Jones, the polarizing quarterback from Alabama who was selected No. 15 overall by Bill Belichick and the New England Patriots.

Talking on the Keyshawn, JWill & Zubin show on Friday morning, Paul Finebaum had some complimentary things to say about Jones’ potential as a player, but absolutely ripped the narrative that the soon-to-be rookie will all of a sudden become the next Tom Brady or Peyton Manning just because he’s being coached by Belichick. Like, seriously, the dude didn’t hold back, even saying Belichick is “getting lazy late in his career” given some of the coaching hires and other decisions he’s made over the years. Take a listen below at the full critique.

“I see him getting lazy late in his career.”@finebaum with some STRONG comments about Bill Belichick. #KJZ @keyshawn @RealJayWilliams pic.twitter.com/45MkDRWB90

Let’s pump the brakes on the criticism of Bill Belichick. Sure, he had a crappy 2020 season after adjusting to life without Tom Brady as his quarterback — which was expected — and endured a campaign that didn’t live up to his normal standards as the Patriots limped to a 7-9 record, but, man, to say the guy’s getting lazy is quite the bold proclamation. There’s honestly no evidence to suggest that, and, give him a proper offseason, which he’ll have as COVID restrictions loosen up a bit around the league — and Belichick could get the Pats right back into contention in the AFC.

What Paul Finebaum does nail the point on is this: Just because Mac Jones is now being coached by Bill Belichick doesn’t mean he’ll instantly become a perennial Pro Bowler or franchise savior. Brady was a once-in-a-generation talent, who outworked his peers — and still does — in order to continuously win Super Bowls. That type of mentality isn’t taught or coached, so it’s on Jones to have that drive himself.

What Belichick can teach the first round pick are the simple fundamentals of being an NFL quarterback, giving him the guide to find success. Coaches don’t make great players. Coaches make good players find the right tools to become great players. It’s on Jones to take to learning and absorbing everything in order to see success.

Of course, should Mac Jones flame out and struggle in the first few years in New England, the draft pick will be criticized and Bill Belichick will only get slammed more by folks like Paul Finebaum for not being the perceived “football genius” that he is. That’s part of the territory — fair or not — and the Patriots coach is used to it by now.

Let’s just hope the best for Jones in New England, and see him build success for himself with or without any major influence from Belichick. The kid has his entire football life in front of him, so it’d be great to see him thrive now that he’s a first-rounder in the NFL Draft.