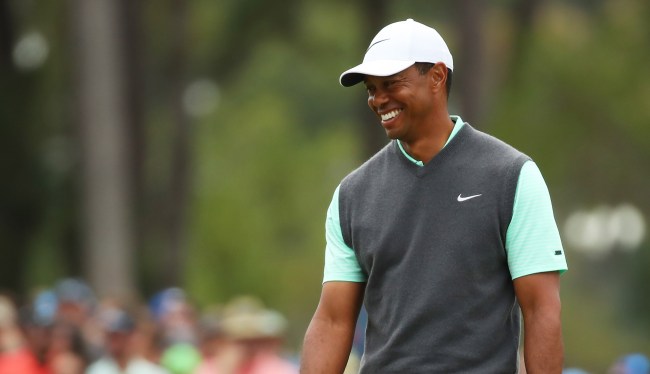 Life is pretty good these days for one Eldrick “Tiger” Woods. Finally, at the age of 43, it would appear that the one-time most dominant player on the PGA Tour is finally at peace with life.

Back in May of 2017, Tiger got nailed for DUI and according to police had a potpourri of five different drugs in his system – two painkillers, an anxiety drug, a sleep medication, and some THC.

After a year of being on probation where he was required to take drug tests and not allowed to drink alcohol, Woods seems to enjoying himself more than ever.

Now his peers are comfortable pulling pranks on him, talking trash, and his swagger is most definitely BACK.

In the past, Woods would have been so serious and surly he never would have reacted the way he did over the weekend at The Players Championship to a fan trying to have a little fun with him by wearing a t-shirt with his mugshot on it.

Check out the sly grin Tiger gives him…

I had Tiger reminiscing about his glory days #THEPLAYERS pic.twitter.com/xsvJQNXBwj

If watching that doesn’t put a smile on your face then you’re just dead inside.

So awesome that Tiger Woods now actually seems like a guy you’d like to hang out with and not a machine bent on world golf domination. Which, of course, only makes us like him even more.

Love his reaction. We’re all human. Shrug it off and move on!