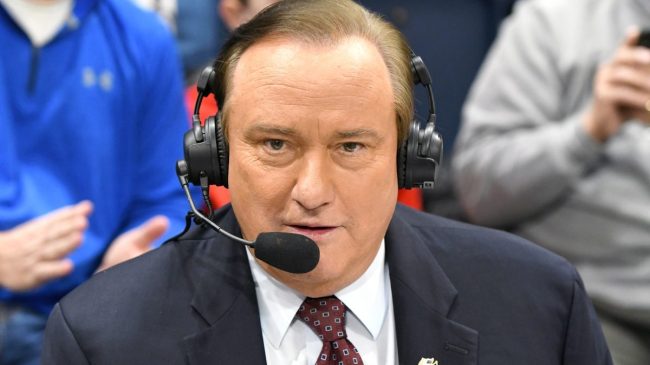 Look, everybody is excited for the college football season.

Why shouldn’t they be?

Georgia wide receiver Ladd McConkey made himself a household name, for better or worse. While Robert Griffin III successfully made his transition from football star to broadcast star.

But some people are just a little too excited for the new season. That includes Fox Sports broadcaster Tim Brando, who got up close and personal with co-broadcaster Spencer Tillman on Saturday night.

Brando and Tillman were in Camp Randall to watch No. 18 Wisconsin host Illinois State to begin the year. The Badgers rolled to 31-0 lead after three quarters thanks in large part to star running back Braelon Allen.

Between the third and fourth quarters the stadium came to life as House of Pain’s “Jump Around” blared over the PA system. The song is part of a tradition dating back to 1998 and one of the best scenes in all of college football.

So you can excuse Brando for getting a little bit excited. But the veteran broadcaster got more than a little excited and what followed was something nobody saw coming.

Tim Brando having a TREMENDOUS time with Spencer Tillman during Jump Around pic.twitter.com/LJ7xIjlwoK

Both Brando and Tillman start jumping around to the music before Brando grabs Tillman by the shoulders. Tillman then appears to back it up on Brando who appears to go with the moment, winding up to give Tillman a solid slap before the camera is forced to cut away.

Listen, we’re all about bros having a good time with their fellow bros. But this? This seems a little bit much.