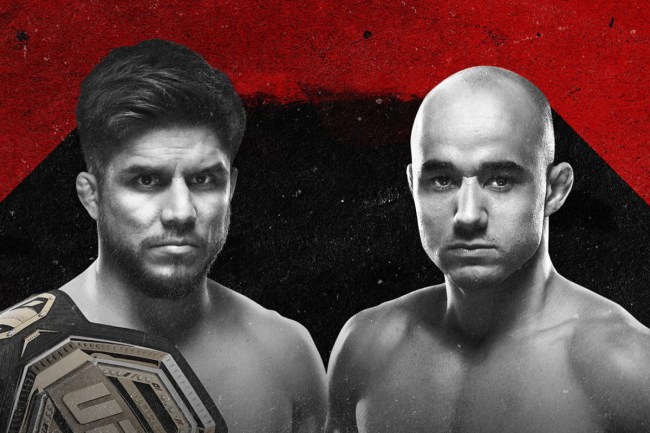 Fight day is finally here! In just a few hours, UFC 238 will start live from the United Center in Chicago, boasting a stacked card with all sorts of storylines. A bantam weight belt will be hoisted. Flyweight champion Henry Cejudo will slug it out with “Magic” Marlon Moraes. There are two incredible women’s fights: Shevchenko vs. Eye and Tatiana Suarez vs. Nina Ansaroff.

We’ve produced an amazing suite of fight content this past week, outlining the various storylines going into tonight’s UFC 238 event. As BroBible’s publisher, I’m really freakin’ proud off Dan Shaprio‘s work for us over the past week, including an interview with Henry Cejudo that contains my favorite quote from an MMA fighter in a long time:

“I love gold. I’m a gold digger. Such a gold digger,” exclaims Cejudo, who’s lyrical cadence is caught somewhere between Kanye West and Austin Powers villain Goldmember. “All I have is gold. Everything I touch turns to gold.”

Badass. Read all our of UFC 238 analysis and predictions below. And don’t forget to buy the UFC 238 PPV via ESPN+!

Never mind the product placement, this is one of the best things you’ll read about UFC flyweight champion Henry Cejudo (@HenryCejudo) all #UFC238 fight week.
The story will never receive the respect it deserves because it’s not for a major MMA site, but give it a gander … https://t.co/qYPF6wLCyP

–Still On The Fence About UFC 238? Let These Finishes Sway You

–What Will It Take For Tatiana Suarez To Earn The Next Strawweight Title Shot?

–This Is Not Your Ordinary Co-Main Event – Shevchenko vs. Eye

–This Is Not Your Ordinary Main Event – Cejudo Vs Moraes

–Tuivasa And Ivanov Will Slug It Out, But Will ‘Bam Bam’ Crush A Shoey After The Fight?

–The UFC 238 People’s Main Event: Tony Ferguson Vs. Donald Cerrone Is Truly A Fight Like None Other

And that about does it. Now it’s time for a great evening in the cage from Chicago.