UFC Champion Max Holloway Tells Those Who Suffer From Depression Like Him: ‘You’re A Superhero’ 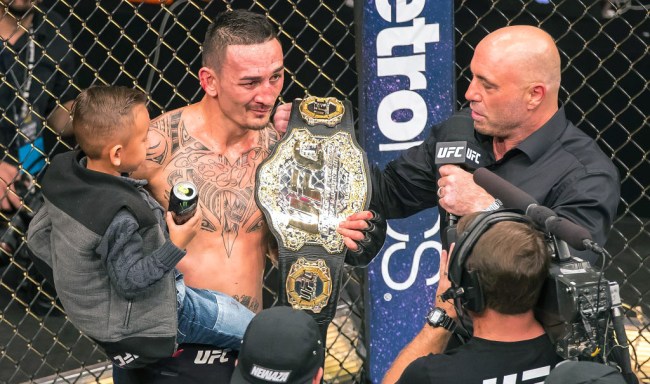 27-year-old UFC fighter Max Holloway has things going pretty good right now in his life. He is 19-3 in his MMA career. He is the undisputed UFC Featherweight Champion (the first American to do so). He was named Fighter of the Year in 2017. And he currently sits fifth in the official UFC pound-for-pound rankings, behind only T.J. Dillashaw, Jon Jones, Khabib Nurmagomedov and Daniel Cormier.

Pretty good, right? Yeah, well, depression could give a sh*t about all that.

You don’t have to ask Max Holloway though, because during his appearance on Ariel Helwani’s MMA Show on Monday he spoke openly and honestly all about it.

UFC featherweight champion Max Holloway opened up about his battle with depression over the past year, calling 2018 “a tough one.”

“It’s been a rough year, but it’s not how you start the race, it’s definitely how you finish,” he told ESPN’s Ariel Helwani on Monday. “I’m glad we get to finish strong. I’m glad I get to do what I believe I was put on this earth to do and fight. Things happen for a reason. One door closes, another bigger door opens.”

What Holloway is referring to is the fact that he hasn’t set foot inside the UFC octagon for 12 months now.

Holloway was supposed to fight at UFC 222 in March, but suffered a leg injury and had to pull out. Then he was a last-minute replacement to fight Khabib Nurmagomedov for the lightweight title at UFC 223 in April, but couldn’t make the weight and doctors told him no. THEN, in July, Holloway was supposed to battle Brian Ortega at UFC 226, but had to withdraw due to “concussion-like symptoms” just days before the fight.

Back in October, Holloway opened up on the Good Show with Ben Ennis & JD Bunkis about how all of those disappointments left him in a state of depression.

“Depression is real and that really hit me hard. I was going through a phase where I wasn’t talking to no one. Only my son. Me and my son would do stuff but I was talking to no one. If I wanted to you I would call you but if people were reaching out to me I was putting myself away. Since I was in that situation, now I’m able to talk about it and I can tell people that’s not the way to do it. The way to do it is talk to your family, talk to your friends, be with everyone because you don’t know when things can change. Life changes on a dime so live life to the fullest.”

Now, taking inspiration from Tyson Fury, another famous fighter who admitted suffering from depression and has made an amazing comeback, Holloway says he is ready to finally face Ortega this Saturday at UFC 232 in Toronto.

“If you’re going through hard times, keep pushing through. You’re right there.” Holloway said. “People always tend to stop when they are right there. They are about to break through, but then they give up and don’t see the other side of it. Keep pushing, keep striving, keep grinding and keep working hard.

“The only person who can get you out of that place is you. Get yourself out of there because it’s not a great place to stay. Remember to reach out to people. People love you. You can get through tough times. Tough times don’t last, but tough people do. Stay strong, keep up the good fight and keep going. We are all human. Even superheroes battle demons sometimes. You’re a superhero on your own.”

Important words about an important topic for so many.