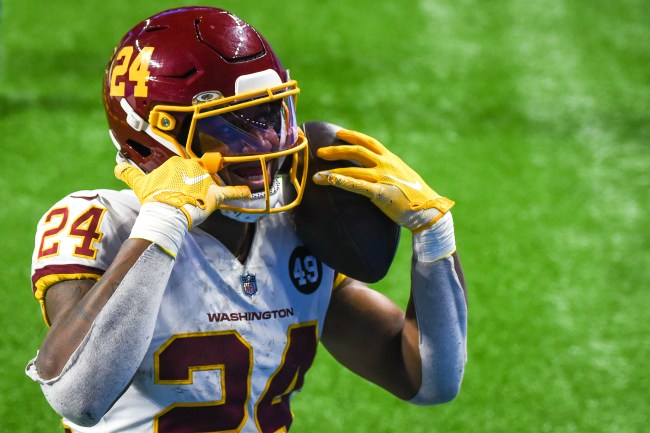 As most people probably expected, the Washington Football Team is having a difficult season so far. Not only has first-year head coach Ron Rivera already benched former starting quarterback Dwayne Haskins, but his backup (Kyle Allen) went down with an injury, and the team’s now playing Alex Smith under center for the foreseeable future. While Smith’s journey back from a gruesome leg injury is amazing, it’s hard to imagine the former No. 1 overall pick will change things around in D.C.

Outside of the pathetic display of football on the field, the entire franchise has been in disarray all year long. From allegations of sexual harassment from a bunch of different women, to rumors about team owner Daniel Snyder having a secret video of a former cheerleading tryout, to all the drama surrounding the team’s name change, the Washington Football Team have had a forgettable 2020 — and we’ve still got about six weeks left before the year’s even over, so who knows what might happen to them next?

One thing we do know is that the team is considering changing its name to something a little bit more… appealing. After dropping that old racist nickname a few months ago, there have been plenty of rumors about the different options that the club may decide on. Nobody knows for sure what will happen, but at least the team’s president, Jason Wright, offered up a little bit of perspective.

During an interview with ESPN‘s Jason Keim, Wright briefly spoke about the possible name change for the team. And part of his reply? You know, just that it shouldn’t be “something messy and embarrassing” — which, you know, probably should go without saying.

“It’s (the Washington Football Team) definitely in the running,” Wright said. “I don’t think anything is off the table… With this one, people are excited about the idea of a club has an identity rooted solely in the area it represents. Maybe it’s Football Team or it’s Football Club. We need to get underneath the why, so no matter what direction we go, we can pull on the heartstrings of folks.”

“The last thing our fan base wants is something messy and embarrassing,” Wright said.

I know the franchise is looking to change its entire culture and move on from all the stuff that happened in the past, but it might be too late to avoid messiness and embarrassment, man. After all, last I checked, the team is still owned by Daniel Snyder, who doesn’t exactly seem like a stand up guy — but that’s just my opinion.

The Washington Football Team president also said that he’s unsure of when a new team name might be announced, hinting that it could be another year from now. So while the current name isn’t exactly sexy, fans may have to live through at least one more season of it.

But here’s to the franchise (hopefully) getting things right if/when they do change the name — and doing the one thing every business should know not to do: Land on something messy or embarrassing. Even off the field, this team is a joke.