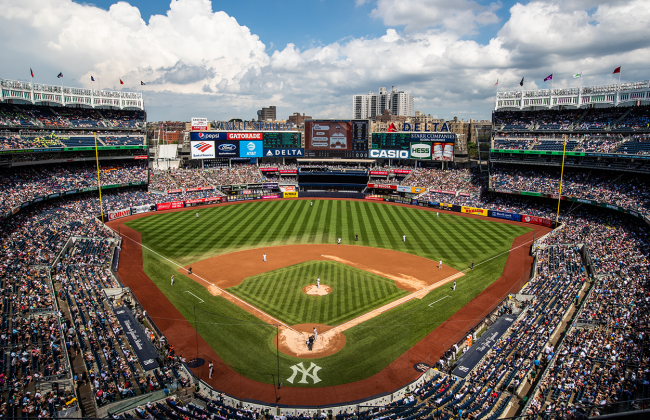 Although it is not the original ‘House That Ruth Built,’ there is something special about Yankee Stadium. Built in 2009, it is amongst the newest in the MLB but the team put extra emphasis on keeping some of the history and legendary feel alive.

The $2.3 billion stadium is absolutely beautiful and the Yankees recently took a really awesome approach to showcasing its home.

Over the last few years, there has been a significant rise in popularity for drone video. It’s not hard to see why.

In the spring of 2021, things took an even bigger step forward. Single-shot footage from inside a bowling alley went insanely viral for being one of the coolest drone videos to date.

Since then, single-shot drone videos have been all the rage, taking people inside malls, around the Las Vegas strip, and even onto the golf course with Tom Brady. Television broadcasts, particularly within racing, are implementing drones into their coverage more and more, and as are marketing teams.

The video that drones are able to capture is unlike anything that we could have even imagined in the early 2000s. Especially as the pilots, who are also videographers, start to get more skilled at maneuvering the drones in and out of confined spaces.

Going off of the recent trend, New York and the MLB partnered to take you inside Yankee Stadium. The single-shot drone video is absolutely remarkable, take a look:

Drones are the future of sports broadcasts and marketing.

Hopefully, as videos like this continue to gain popularity and views, other teams will follow suit. It will never get boring to watch a drone fly around a sporting event or inside a stadium.