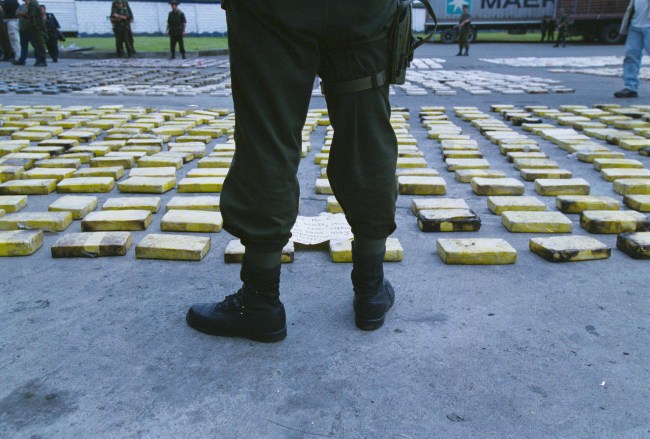 If you are in middle management for an Uruguayan drug cartel, you may want to take some PTO while the smoke blows over concerning a record-breaking drug bust. The largest drug bust in Uruguay’s history ended with six tons of cocaine being seized, which equals $1.3 billion.

Uruguay Naval and Customs officers seized 4.4 tons of cocaine at a seaport at Uruguay’s capital of Montevideo, then authorities seized another 1.5 tons at a ranch. The total drug bust equaled a street value of nearly $1.3 billion. One container had more than 3,000 bricks of cocaine, according to Uruguayan Navy spokesman Diego Perona.

Uruguay Customs Director Jaime Borgiani said they were not certain where the drugs originated from, but they did say they were loaded on to trucks Tuesday at a ranch in Nueva Palmira, located on the border with Argentina about 180 miles from Montevideo. The ranch’s owner and son were arrested, as well as two workers.

Uruguay seizes 6 tons of cocaine worth $1B in country’s largest bust pic.twitter.com/cufEzZSiiV

“The important thing is to show the world and drug traffickers that you don’t mess around with Uruguayan customs,” Borgiani told reporters. “We’ve taken the necessary steps to rid the country of this scourge.”

The authorities were tipped off because there was a massive shipment of soy flour, which is rare for it to be in such large quantities, especially for Africa. Plus, the export company did not have a history of transporting that much soy flour in the past, according to local news reports. Seaport authority Customs Directorate said a scanner flagged “abnormalities” in the shipment.

The National Armada said the four shipping containers of soy flour had a destination of Lome, the capital of Togo in West Africa. There is a great deal of cocaine that is funneled from South America to Africa to its final destination of Europe.

This has been a tough year for drug cartels as some of the biggest drug busts of all-time happened in 2019.

Keep Miami In Your Prayers Tonight After 12,000 Pounds Of Cocaine Seized By The US Coast Guard

Keep Europe In Your Prayers Tonight After $1.1 BILLION In Cocaine Seized, Germany’s Biggest Drug Bust EVER

Keep Wall Street In Your Prayers Tonight After $77 Million In Cocaine Seized, Biggest In NYC Area In 25 Years