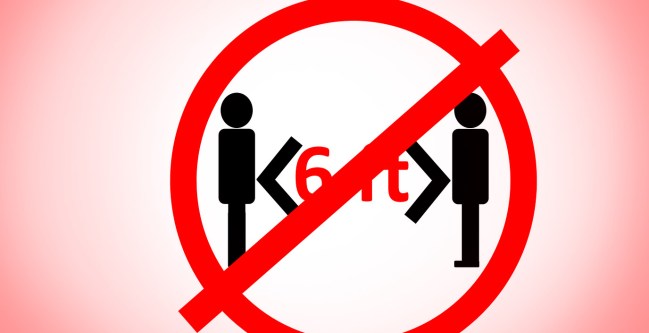 In the five months since the world was thrown into a global pandemic we have seen more than our fair share of Karens, both male and female, who despite all of the evidence absolutely refuse to abide by any safety protocols including masks and/or social distancing.

Heck, a third of Americans claim that even if they were offered a FDA-approved vaccine for the coronavirus for free they would turn it down.

Another example of the lengths people who are against following any sort of safety protocols occured recently at a Shoppers Drug Mart store in Niagara Falls, Ontario.

A scofflaw named Sandor Ligetfalvy was arrested and faces a fine of up to $1,000 for scraping the 6-foot social distancing stickers off the floor inside the business.

Sandor Ligetfalvy said he was sending a message to “the corporate world” for creating a climate of fear as he pulled the directional arrows off the floor of the Victoria Avenue store in Niagara Falls at about noon Sunday. As two friends filmed, he was confronted by staff and the manager, who asked them to leave.

“Get out of my store now!” a woman tells him in a video posted Monday on YouTube.

A second, longer video also posted on YouTube, shows Ligetfalvy — not wearing a protective mask — methodically scraping off the markers with a paint scraper blade as confused shoppers walk by. “I scrape for justice, I scrape for freedom,” he sings at one point in a nod to Peter, Paul and Mary’s “If I Had a Hammer.”

Want to see those videos? Boom…

When asked later about the incident Ligetfalvy said he was fighting back against the “psychology of fear,” adding, “If we don’t push back now, we’ll never get the chance to push back. What are we doing to our society when we’re promoting fear everywhere we go? I’m tired of having to go to a store — which used to be a type of therapy — and now it’s a type of trauma.”

Ligetfalvy said what he did wasn’t vandalism, it was “unvandalism.”

After completing his scraping of the stickers, Ligetfalvy was met with police who told him to lie on the ground where they handcuffed him and charged him with one count of mischief and violating the Niagara Region’s mandatory mask bylaw for enclosed public spaces.

In America, states like Connecticut have also begun started dropping $1,000 fines on citizens who disobey the pandemic rules, and you don’t even want to know what the Colombian drug cartels have been doing to anti-maskers down in South America.