Jeff Bezos Is Being Sued By His Girlfriend’s Brother For Defamation, Amazon CEO Calls It ‘Extortion’ 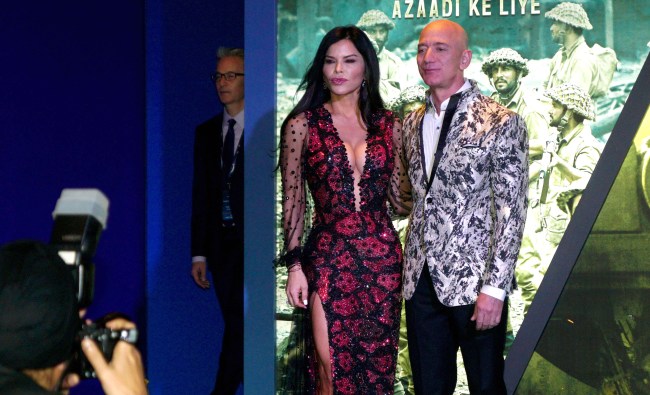 Back in January of 2019 when it was revealed that Jeff Bezos and his wife of 25 years, MacKenzie Bezos, were getting a divorce rumors swirled that the Amazon CEO and richest man in the world was having an affair with his neighbor and ex-wife of NFL legend Tony Gonzalez, Lauren Sanchez.

Speculation about who leaked the sexts pointed fingers at MacKenzie Bezos, Lauren Sanchez, and eventually landed on Sanchez’s brother Michael.

The sexts, acquired by the National Enquirer, were allegedly sold to the publication by Michael Sanchez and used as “extortion” according to the Amazon founder.

Michael Sanchez later dismissed claims that he sold the sexts and graphic photos to the National Enquirer.

In January of 2020, a new report claimed that Saudi prince Mohammed bin Salman was the one who had Bezos’ phone hacked after sending Bezos a photograph of a woman resembling Lauren Sanchez in an effort to taunt him.

Now, Lauren’s “dutiful brother and manager” Michael Sanchez is suing Jeff Bezos and his security consultant Gavin de Becker, claiming he was “scapegoated” and falsely accused of leaking the nude photos and texts.

“Mr. de Becker latched onto the idea that Mr. Sanchez, in a conspiracy with his conservative friends like Carter Page and Roger Stone, made sense as the culprit and immediately began disseminating that to various news sources, in blatant disregard of its falsity,” the lawsuit reads, reports Forbes.

According to TMZ, “the feds reportedly said last week there was evidence Michael was the source of the graphic messages and got $200k in return for his services.”

Lauren Sanchez addressed the lawsuit in a statement provided to TMZ by her attorney, saying, “Michael is my older brother. He secretly provided my most personal information to the National Enquirer — a deep and unforgivable betrayal. My family is hurting over this new baseless and untrue lawsuit, and we truly hope my brother finds peace.”

Lawyers for Bezos and de Becker, who is also named in Michael Sanchez’s lawsuit, stated in a court filing that neither man ever accused Sanchez of leaking the nude photos.

“Mr. Sanchez’s defamation claim fails the most basic of requirements: it fails to identify any instance in which Defendants, or even any news report, published or made any of the alleged statements about him,” the filing reads, according to CNBC.

“Extortion rears its head again in this lawsuit, this time not only aimed at Defendants but also directly threatening speech protected under the First Amendment,” it continues. “By filing this lawsuit, Mr. Sanchez hopes to put himself back on the front pages and extract money from Defendants by leveraging the current media environment to harass them. But no matter what Michael Sanchez says or how many times he repeats himself, at the heart of his Complaint lies the same public controversy he helped generate and has tried to exploit—and from which he surreptitiously earned $200,000.”

Bezos and de Becker’s attorneys are trying to get the Superior Court of California in Los Angeles County to dismiss the lawsuit.