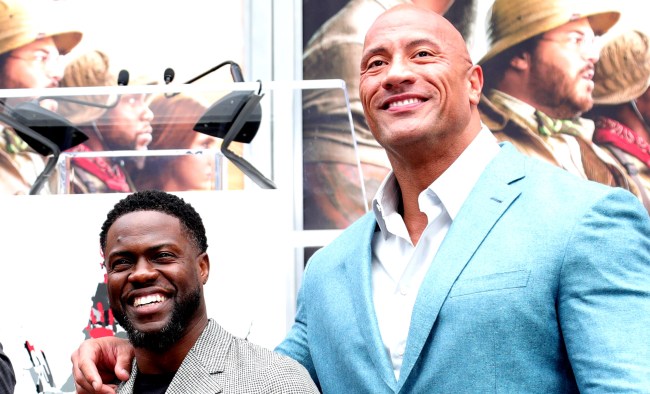 The rivalry between Kevin Hart and Dwayne “The Rock” Johnson is one of the funniest feuds Hollywood has ever seen.

Oh, sure Ryan Reynolds and Hugh Jackman’s back and forth is very entertaining, but who out there really thinks Hugh Jackman has a mean bone in his body? It’s almost not fair for someone with the biting wit possessed by Reynolds to be trolling someone who seems to be as nice as Jackman. Reynolds is always going to win in the end. Not that Jackman hasn’t been able to hold his own in the funny feud.

It’s just that the rivalry between Kevin Hart and The Rock just seems so legitimately genuine. Probably because it is. They’ve appeared in multiple movies together and are both quick to offer real life assistance to one another in times of need. They’re true bros. And what do true bros do better than anything? Bust each other’s balls.

Back in March, Hart fired the feud back up when while on the set of his upcoming Quibi series Die Hart, the comedian called his pal The Rock a bitch (and other things) for not doing all of his own stunts. You know, the way guys like Tom Cruise, Harrison Ford, and, umm, he does.

Now, with Die Hart debuting on Monday, Hart and his co-star Nathalie Emmanuel did an interview with Entertainment Weekly where he talks about what to expect from his new series, as well as what the future holds for Hart in the action genre.

Of course, it was hilarious.

When asked what kind of training they had to do for the show, it went down like this…

HART: We had an amazing team of stunt coordinators, and stuntmen, stuntwomen, and they all worked with Nathalie day in, day out, to get her to a place to where she felt comfortable. Now, me on the other hand, you’re talking about a guy that has raw, authentic talent and comfort within the space of action and stunts. So it was more of a show-up-and-go thing for me. Not a lot of stretching, just more of a muscle memory, because, you know, I’ve been here before. So we had to be patient with Nathalie and just wait. It was a process.

HART: What are you talking about?

Later, when asked if Hart would be moving into more leading man, Dwayne Johnson-type of roles in the future, Hart said, nah, he can do better.

“Not Dwayne Johnson-type of stuff, because those things are stupid,” Hart replied. “My things are gonna be a lot better.

“I lined up like 13 projects already, all action. One of them is called This Building Ain’t Mine. Another project is called I’m Not What You Think I Used To Be. It’s about robots. There’s another one called Spy I, Robot I. Smith Mr. And Mrs. Just working titles. Possible Mission. Don’t Train My Dog, I Got This.”