Mike Tyson Says, Even At Age 54, He Can Whip Rocky Balboa, Ivan Drago And Conor McGregor 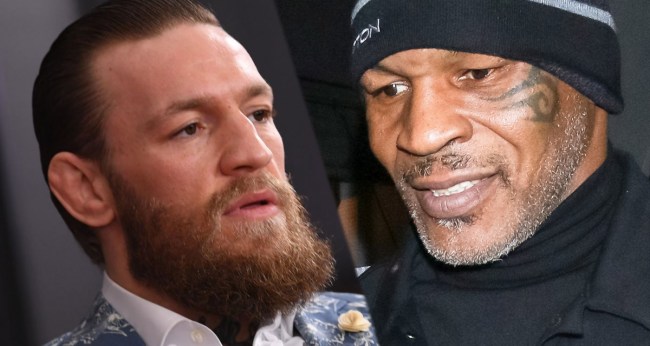 Ever since Mike Tyson started dropping terrifying training videos, saying he “wants to go to war again” back in May, fans have been wondering what the future holds for the former undisputed world heavyweight champion.

Part of that question was answered when the 54-year-old Tyson revealed he would be boxing 51-year-old former world champion in four different weight classes Roy Jones, Jr. in an eight-round exhibition bout on September 12th.

This week, Tyson showed up on The Tonight Show Starring Jimmy Fallon to talk about his appearance on Shark Week and discuss his upcoming fight versus Jones.

During his chat with Fallon, Jimmy eventually steered the conversation to, besides Roy Jones, Jr., what other legends Iron Mike thinks he could still take down including Rocky Balboa, Ivan Drago, Conor McGregor, and The Karate Kid.

As for Balboa, Tyson says he “would lay him out,” Drago is “too slow, too many muscles,” he would kick McGregor’s ass (perhaps after smoking some weed together), and says he would have to surrender to The Karate Kid.

“Wax off, wax on, this looks pretty complicated,” replied Tyson.

Tyson has already gone on record as saying he would whip Apollo Creed, so beating Rocky and Drago only makes sense. Soda Popinski, however…

Of course, Tyson clarified that he would beat McGregor if they are only playing by boxing rules as he’s already gone on record as saying he wouldn’t have been successful fighting in the UFC – a sentiment with which former UFC champion Chuck Liddell agreed.

He won’t get three minutes I’d shoot right away. He had no ground training or takedown defense training at all. So he’d have to catch me on the way in or he’d never get off the ground period! https://t.co/juixbvqjJ8

Now, if Tyson wanted to keep things around the same age and mix it up with an MMA fighter, 56-year-old UFC Hall of Famer Ken Shamrock says he’d be down.