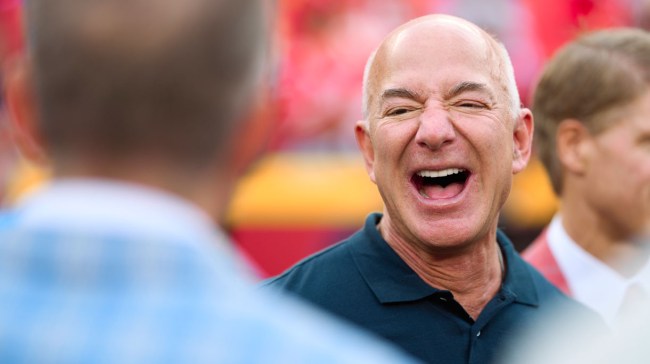 The combination of the NFL celebrating the 50th anniversary of Arrowhead Stadium and the broadcast of the game being aired exclusively on Amazon Prime Video led to one of the most meme-able photos in sports history.

Due to each of those events occurring in Kansas City Thursday night, both NFL commissioner Roger Goodell and Amazon founder Jeff Bezos were each in attendance at the game.

Naturally, being two regular blue-collar bros with similar interests, they ended up sitting together to watch the Chiefs-Chargers game.

Then, with the game being aired on Amazon Prime Video, at one point a camera focused on these two regular Joes having a conversation.

Were they discussing how the big 11-year, $113 billion deal Amazon signed before the season to air NFL games alienates a whole new group of football fans?

“This is a seminal moment for the distribution of our content,” Goodell said back when the new deal was signed. “These deals remind me of back in the ‘60s, how NFL content and games were a big part of the broadcast TV growth, and then going into the ’80s, with our first commitment to cable television, and then the ’90s with our commitment to satellite television and our Sunday Ticket package. I’m sure we’re going to look back on these deals the same way that we did back in the 1980s.

“This provides our fans with greater access. We want to provide our games on more platforms than ever before.”

Perhaps Goodell and Bezos were talking about how glad they were to be watching the game in person and not on Prime Video’s annoyingly spotty streaming feed.

Maybe they were finishing up their negotiations for Amazon to start airing an NFL game on Black Friday.

Black Friday, Cyber Monday, and TONS of holiday deals are on the way – are you ready? We are! 👏 pic.twitter.com/SpFTEWpyJq

Whatever it was these two average guys were yapping about, it certainly caught the attention of a whole lot of football fans on social media… who then turned it into the NFL meme of the year.

That’s probably not far off from the truth.

That’s probably how a lot of people see the photo of Bezos and Goodell in their heads.

Bezos does really want to own an NFL team.

Indeed. What a night for Jeff Bezos at Arrowhead.

“What makes you think you can kill Superman when you can’t even kill a mere mortal?” pic.twitter.com/PGQXevXyj2