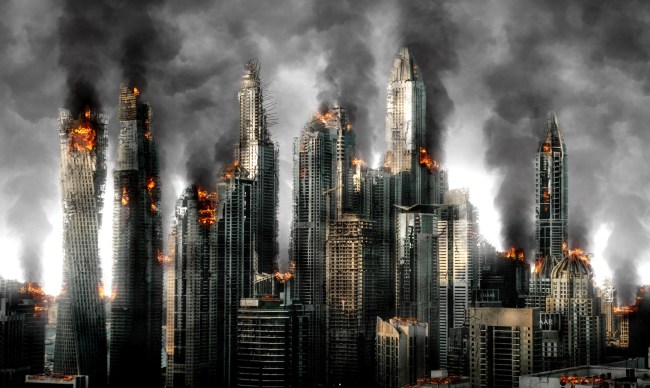 There have been a lot, I mean A LOT, of doomsday prophecies put forth over the years, but not very many of them are put out there by actual, real life researchers as is the case today.

A report recently published by researchers at Deutsche Bank claims that a “massive” disaster on a scale far worse than the current global pandemic has a one-in-three chance of occurring within the next decade.

These researchers claim that there are four “massive” disasters with a high likelihood of occurring in the next 10 years: (1) a major influenza pandemic killing more than two million people, (2) a globally catastrophic volcanic eruption, (3) a major solar flare, or (4) a global war.

MarketWatch delves further into the study…

If the time frame is two decades, then there is a 56% chance of one of these disasters occurring, the analysts say, based on various studies and risk assessments. Earthquakes were omitted from the numbers on the grounds that they are more local events.

The solar flare possibility is one rarely discussed, perhaps because the last severe one was in 1859, but the Deutsche Bank team finds that to be more likely than a major global war.

“There could be major power outages as electrical power grids are disrupted, which in turn would have knock-on effects throughout the economy as critical infrastructure is unable to be run properly. Lives could be lost if it impacted hospitals and medical care. Communications would be disrupted, many payment systems would be dysfunctional, and GPS [Global Positioning System] satellites would face extensive interference, to the detriment of all the individuals and industries that rely on accurate location services, not least aircraft,” says the cheery report.

They added that the odds of a major solar flare happening are 12 percent within the next decade, and a 40 percent chance it will occur sometime in the next 40 years.

“Given that COVID-19 has led to severe recessions and lockdowns in numerous countries, an even more serious pandemic could be even more catastrophic,” reads the study.

“Consider that the relatively remote Eyjafjallajökull volcano in Iceland shut down nearly all of European airspace in 2010, leading to extensive economic disruption.”

“And further back in 1991, the eruption of Mount Pinatubo in the Philippines was so large it actually led to a reduction in global temperatures over the subsequent two years.”

“So an important question is what would happen if a much larger, more catastrophic eruption occurred, and how likely is this to happen?”

One shudders to imagine. Especially when taking in the fact that scientists recently stated that Mount St. Helens, site of the deadliest volcanic event in U.S. history, will erupt again in our lifetime.

Previously…
• Planet X, AKA doomsday planet Nibiru, has returned, sparking more end of the world theories
• Conspiracy theorists tie Nibiru, AKA hidden doomsday Planet X, to the current pandemic
• Uh oh, a ‘doomsday vault’ buried deep in the Arctic just added a bunch of supplies in preparation for the apocalypse
• Apocalyptic asteroid will hit in the next decade and space agencies are covering it up, says biblical scholar
• Humans could become extinct in the near future and most people don’t really care, says new study
• The University of Oxford has disturbing news about the chance of human extinction within the next year
• Experts claim the apocalypse is closer than we think as a ‘zombification’ parasite may have already infected humans
• Mayan calendar researcher says new calculation suggests ‘serious problems are coming our way’
• Planet X Nibiru Will Appear On April 23 To Signify The End Of The World, So Plan Accordingly
• Planet X Is Still Coming To End The World, World Leaders Are Just Covering It Up, Say ‘Experts’
• Mark Your Calendars, The World Is Going To End On November 19th… No, Really, It Is This Time
• Heads Up, An Asteroid From A Hidden Planet Is Going Hit Earth Causing A Devastating Tsunami NEXT MONTH!
• Doesn’t Matter Who’s President, Because A Rogue Planet Is Heading For Earth To ‘Destroy All Human Life’