Adam Gase Sucks As A Head Coach, But He Could Reportedly Join Bill Belichick As An Assistant Coach 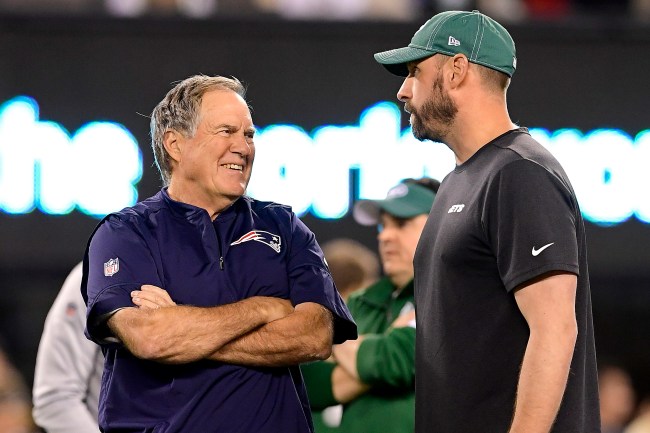 After winning two-straight (meaningless) games following an 0-13 start to the NFL season, could Adam Gase actually be brought back next year by the New York Jets? Doubtful, but, hey, anything’s possible. Even with the two wins — which cost “Gang Green” the No. 1 overall pick and a chance at drafting Clemson quarterback Trevor Lawrence, which really pissed off the team’s fans — Gase’s overall head coaching record is a miserable 32-47, proving the guy probably doesn’t have the chops to lead a team.

As an assistant coach, though, Gase has always been respected. Praised for his work with Peyton Manning, whom he coached in Denver during the last two years of the future Hall of Famer’s career, could Adam Gase really be a quarterback whisperer? Considering Manning was basically a coach on the field at that point in his career, it’s hard to give Gase too much credit — but, hey, he’s a beneficiary of those explosive Denver teams.

With his Jets tenure (presumably) coming to an end after Week 17 of this NFL season, Gase is already being mentioned as a possible candidate for some assistant coaching gigs around the league. One of those rumors has him joining Bill Belichick’s staff in New England, which, if you ask any NFL fan, seems absurd. But that’s what Albert Breer reported in his MMQB column for Sports Illustrated.

The Patriots’ staffing situation is another one to keep an eye on. QB coach Jedd Fisch is gone and OC Josh McDaniels might be too. Jets coach Adam Gase (assuming he’s fired), Browns assistant/ex-Patriots WR coach Chad O’Shea and current tight ends coach Nick Caley are three guys who I think could factor into the new setup. Gase worked for McDaniels in Denver, and O’Shea left Foxboro on good terms two years ago.

No disrespect to Adam Gase, but… what?!? How on earth does this guy continue to get opportunities around the league while more successful coaches like Chiefs Offensive Coordinator Eric Bieniemy doesn’t get a sniff as a head coach? It’s actually some serious B.S., man.

Breer isn’t the only one reporting Gase could be headed to Belichick’s Patriots staff, either, as The Boston Globe‘s Ben Volin also hinted at hearing “some buzz” about the possibility while talking to WEEI Monday.

“I heard some buzz last night. You hear the name to watch for the Patriots’ next quarterbacks coach: Mr. Adam Gase,” Volin said. “He goes all the way back to 1999 on the Michigan State staff with Josh McDaniels. They worked under Nick Saban. Adam Gase and McDaniels are tight. Look out for that one.”

Gase is as football-obsessed as they come, with the guy even ditching out of the delivery room a mere minutes after his son was born a few years ago. That’s a cool story and all, but, c’mon, the results on the field haven’t been there, and it seems pretty messed up to think he’ll actually upgrade from head coach of a dysfunctional Jets franchise to joining the staff in New England.

Plenty of people have slammed the coaching abilities of Adam Gase, and, personally speaking, if there’s anybody who needs a year away from football to just collect his thoughts before getting back into coaching, it’s him. With rumors of him joining Belichick’s staff in New England, though, chances aren’t too high that he’ll actually take some time off.