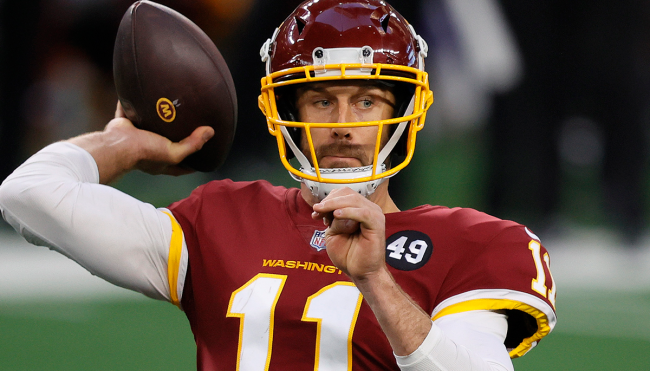 In 2018, Alex Smith suffered a gruesome injury that induced Kevin Ware levels of nausea after his leg bent at a stomach-churning angle before it was quickly put in an air cast and the quarterback was carted off of the field.

The devastating setback that Alex Smith befell occurred 33 years to the day after Joe Theismann succumbed to an equally traumatic one that ultimately ended his career. It seemed like there was a very good chance the 34-year-old would suffer the same fate based on the reports that came out in the wake of the injury, especially after he battled a serious infection stemming from one of the 17 surgeries he underwent while doctors attempted to not only mend it but fend off amputation.

After missing the entirety of the 2019 season, Smith made his grand return in 2020 when he showed up at the Washington Football Team’s training camp. After spending a couple of months shaking the rust off, he stepped back onto the field for the first time in almost two years and eventually secured the Comeback Player of the Year Award that he was the only true candidate for.

Smith battled through plenty of adversity while staging that comeback, including one fairly unlikely source: the team he played for. A couple of months before he announced he was hanging up his cleats, he said the WFT wasn’t exactly thrilled he decided to return, and in a recent interview with Sports Illustrated, he was more than happy to spill a bit more tea by outlining the various ways Washington seemingly attempted to sabotage his return.

The entire thing is worth the read, but there are some fairly juicy excerpts concerning his various beefs with the coaching staff, including:

He did not understand the tactics his coaches used to keep him sidelined. First, they placed him on the Physically Unable to Perform list, even though world-renowned doctors had pronounced him physically able to perform.

At camp, players wore GPS trackers, and none traversed 4,000 yards a day on average like Smith, whose coaches asked him to carry extra weight, push sleds and hurdle bags for drills—tasks he had never done in 15 pro seasons, let alone before his leg had to be rebuilt.

Smith believed the team wanted to see if it could break him, and if that sounds paranoid, the team physician agreed with him. They seemed to be asking, Dr. Robin West says, “What can he withstand?”

“I was scared to death about putting him back out there, and that is something I struggled with every day. It’s unfortunate that he feels we patronized him because I can tell you that was not our intention.

At the end of the day, I commend Alex because he proved everyone wrong.”

I cannot imagine how happy Washington must be that the Texans exist, as they’d easily be the top contender for the most dysfunctional franchise in the league if they didn’t.