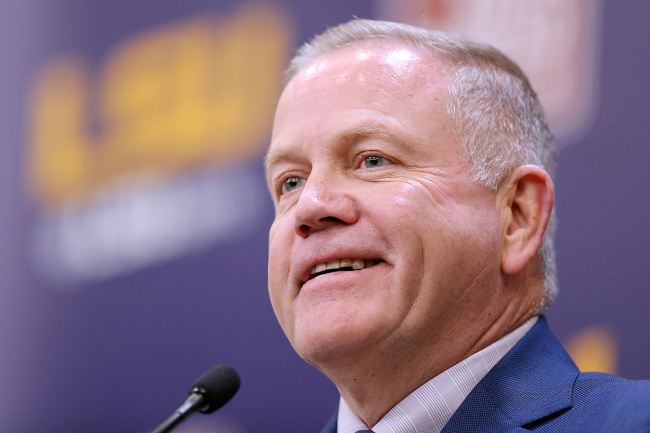 After a wild offseason during which he was the butt of many jokes, Kelly began spring practice with a joke. And it actually landed!

Kelly was hired at LSU in November. Since then, he has been clowned on for his awkward dance to Garth Brooks, took an awkward photo with a five-star quarterback he wants to flip from Notre Dame, arrived late to his first press conference at LSU because of a parking issue, tried to hit ‘The Griddy,’ got called out by Lane Kiffin for grinding on a recruit that committed to Alabama, and broke out a weird, fake southern accent.

It was a tough first offseason for Kelly. He was all over the headlines.

In each instance, Kelly deserved to be featured across nearly every college football media platform. His actions were laughable.

However, as is the case with most things, there are often stories that are blown out of proportion. Kelly has experienced that first-hand as a 31-year college football head coach and decided to lean into the commotion on Thursday.

After LSU concluded its first spring practice of the year, Kelly’s first practice with the Tigers, he addressed the media. He started things off by giving the media what they wanted — two outlandish, hilarious headlines.

Kelly said that there was no way that LSU was not going to win the national championship and said that the team was practicing in its underwear.

“National championship, no doubt, we were running around in our underwear so I can tell you that’s the facts.” ⁦@CoachBrianKelly after his first spring practice⁩ 😂😂😂 ⁦⁦@WBRZ⁩ pic.twitter.com/Rtib3Xpooz

While it’s not always fun when someone leans into jokes, Kelly’s opening statement was objectively funny. Point for Brian Kelly.