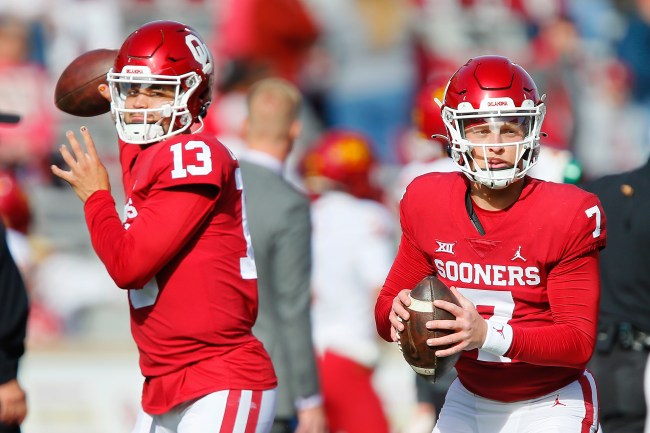 When Caleb Williams arrived on campus at Oklahoma, his expectation was likely that he would sit for a season behind Spencer Rattler and then take over the starting role. It didn’t quite play out that way and the relationship between the two quarterbacks was certainly unique.

Williams recently spoke about his relationship and indicated that their dynamic toward each other was tolerant, but nothing more. His comments, of course, should come as no surprise.

Rattler was benched in favor of Williams against Texas. Oklahoma won four of its first five games by a touchdown or less and the Sooners came out flat against the Longhorns.

In turn, head coach Lincoln Riley turned to Williams, who led Oklahoma back from the largest deficit in the rivalry’s history. Rattler was clearly upset with the situation on the sideline and was notably absent from the field during the postgame celebration.

A week later, with Williams as the starter, Oklahoma beat TCU and Rattler was visibly frustrated once again. He wanted to be on the field.

Rattler ended up showing great maturity in the backup role as the season went on and ended up transferring to South Carolina. However, that did not change things with Williams.

Rattler and Williams are not great friends.

Each of their instagram profiles made it very clear that they were not particularly close. And now Williams is saying so himself.

During an appearance on The Podcast On The Prairie, Williams discussed his relationship with his former quarterback counterpart. He said what we pretty much already knew.

It was not a secret that Rattler wasn’t celebrating Williams’ success. However, as Williams pointed out, just because they weren’t best friends doesn’t mean that they were enemies.

Both of them have moved on and now Williams is focused on his future with or without the Sooners and Rattler is focused on rebuilding his NFL Draft stock in Columbia.