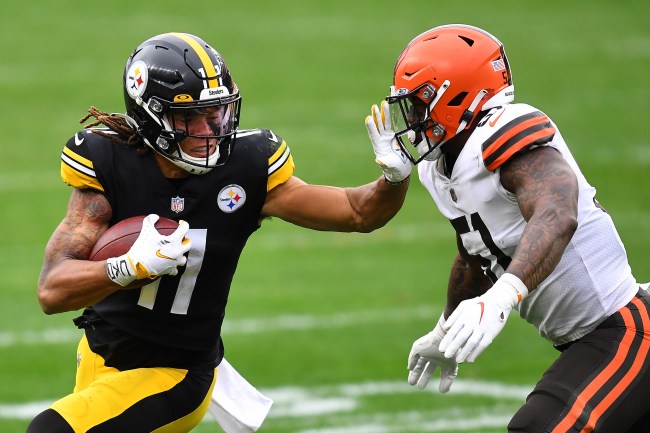 Following his team’s loss in the NFL Playoffs, Steelers rookie wideout Chase Claypool thought running his mouth after being embarrassed by the Cleveland Browns a day earlier was a wise idea. It wasn’t. That didn’t matter to the Notre Dame product, who gleefully declared that Cleveland’s next opponent, the Kansas City Chiefs, would pretty much wax them in the Divisional Round.

Whether or not that actually happens, I, along with more than a few other people, didn’t understand why Claypool continued talking trash about the Browns. Sure, prior to a game, go ahead and run your mouth all you want to. It’s part of the game. It’s used to both psyche yourself up and try to distract your opponents. But afterwards? It’s time to move on — especially after you lose.

Sadly, Chase Claypool hasn’t quite gotten over the shocking 48-37 loss to the Browns in the NFL Playoffs, which saw his Steelers even trailing by as many as 28 at one point. Instead of accepting the outcome, he continues to focus on how Cleveland celebrated the victory, with the first-year wideout saying on Thursday that he found celebrating Browns players a little classless.

🗣 “If the Browns had won with more class, then I wouldn’t have been so salty.”@ChaseClaypool explains all the back and forth from the past week. pic.twitter.com/AN3Mvib7M0

“If the Browns had won with more class, then I wouldn’t have been so salty about it, but them mocking JuJu [Smith-Schuster] during the game and after the game just didn’t sit right with me.”

“They were just super classless, you know against JuJu, towards JuJu what they were saying on the field towards the end of the game, so I’m not going to have respect for a team that doesn’t have respect for us.’’

“They can enjoy the win and another week of football but they’ll be on the couch right next to me, so it’s all good.”

Pardon my French, Chase Claypool, but grow some damn balls. Let’s take a look at why Browns players were celebrating so jubilantly, shall we?

OK, now do you understand why Cleveland players were so excited about the Wild Card victory in the NFL Playoffs, Chase? Maybe had guys in your very locker room like JuJu not riled them up, you’d feel a little differently. Maybe it’s your teammate who deserves the blame and not Browns players? Just a thought.

Rather than man up, accept the loss and respect the Browns, Claypool comes across as a serious crybaby here. Remember, it was Smith-Schuster who found it necessary to disrespect opponents by dancing on midfield logos prior to games — which pissed other teams off. That’s some serious self-entitlement.

Chase Claypool is young and talented. But he needs to grow the hell up a little bit so not to sound like a whiny victim who needs to see another team celebrate across the field. At least the Browns players didn’t band together and disrespect the Steelers like the Ravens did to the Titans after their win in the NFL Playoffs. I wonder how much Claypool would’ve cried had they did…?

Actually, who gives a damn about Claypool at this point. He’s at home watching the postseason like the rest of us, and the Browns are hoping to continue their deep run with a win over the Chiefs on Sunday.