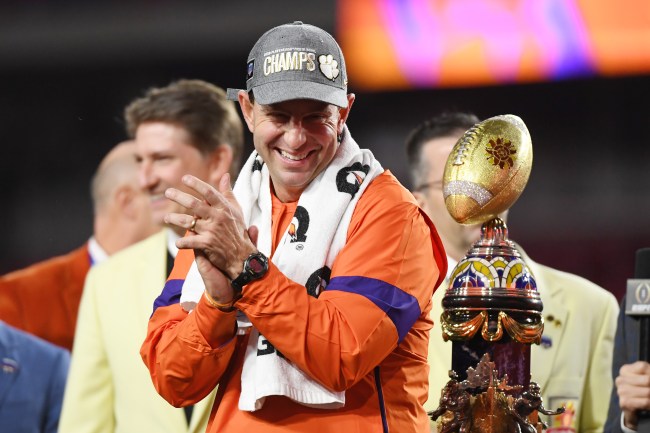 Clemson Tigers head football coach Dabo Swinney has officially fallen into that “I don’t give a damn” category when it comes to speaking his mind. While Dabo has always come across as pretty clean cut, polite and funny in that “ah shucks” Gomer Pile kind of way, the two-time national championship winning coach has added the word “savage” into his repertoire, as he’s been more open about his opinions over the past year or so.

Not only did that show leading up to the college football season kicking off — with Swinney making his feelings known that he wanted his team to play despite a raging pandemic going on around the globe — but Dabo sure as hell didn’t hold back when bashing the way the final rankings appeared for the College Football Playoff. Specifically targeting Ohio State, Dabo Swinney complained about the Buckeyes only playing six games total and still reaching the Final Four. Hell, the Clemson head coach even ranked the Big Ten champion Bucks as No. 11 in his final coaches’ poll, which pissed off a lot of people in Columbus.

After hearing the cries from Ohio State fans, Swinney made sure he responded in kind to those bashing his rankings, delivering a clear message to all the haters out there.

Per ESPN, via The Spun:

“First of all, my vote don’t mean anything. But it means something to me, you know? It’s my poll. I do it. It creates a stir because we just so happen to be playing Ohio State. It has nothing to do with Ohio State — absolutely zero. You can change the name to Michigan or Georgia or Florida or Tennessee or Nebraska. Anytime you have a top-10 (ranking), it should be that special. This year it’s like really, really, really special and I wanted it to be that way. And so, I wanted to recognize the teams that played nine games or more. And so, if you didn’t play nine games, I just didn’t consider you for the Top 10. That’s why (the Buckeyes) were 11,” Swinney said.

“Obviously, they’re a great team. They’re plenty good enough and talented enough to beat us and good enough to win the national championship. But in my opinion, I don’t think that it’s right that three teams have to play 13 games to win it all and one team has to play eight. What universe am I living in? And it has nothing to with them. It was about qualifying. And I didn’t think they were qualified, based on the number of games, versus all these other teams. … In my opinion — Texas A&M, Florida, Oklahoma, Cincinnati — they got punished for playing more games.”

Now, considering Dabo’s Clemson team squares off against Ohio State in one of the College Football Playoff Semifinals games on January 1, you know things are going to be extra testy. Not only is this a rematch of last year’s semifinal game between the two — which was an epic contest — but now Swinney adds some serious bulletin board material for the Buckeyes’ locker room.

Sure, Swinney acknowledges his upcoming opponent is a great team, but then backtracks a bit by listing four teams who he thinks should be rewarded for playing more games during a pandemic. Dabo lives in his own world, man, and kind of forgets the simple fact that Ohio State still beat everybody on their schedule, despite games being forced to be cancelled because of COVID outbreaks prior to kick-off. He even said earlier this year that a national title shouldn’t be undervalued because of this season’s strange circumstances, so he kind of sounds like a hypocrite when talking about the Buckeyes.

Swinney even dropped one last jab on Buckeyes’ fans with a zinger about their rivalry with Michigan, jokingly saying he could probably win Governor in the state up North.

Dabo on offending Ohio State fan base: "I could probably run for governor in Michigan and have a chance."

As if college football fans weren’t already pumped to see a rematch between Clemson and Ohio State, Trevor Lawrence and Justin Fields, and two explosive offenses in the College Football Playoff Semis, Dabo Swinney adds a little cherry on top of the sundae with his latest comments. We’ll have to see if the Buckeyes use the disrespect as fuel come January 1.