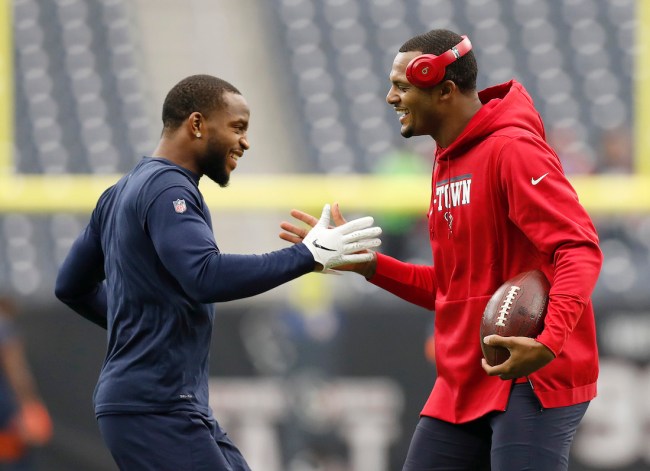 The Deshaun Watson trade rumors have taken a backseat to more important issues going on with the Texans’ quarterback — the sexual assault allegations made by numerous massage therapists. But that doesn’t necessarily mean the perennial Pro Bowler’s future is still in Houston. In fact, once the league sorts out further details, Watson could still be replaced.

This entire NFL offseason has been a strange one, especially for star quarterbacks. We’ve seen a few get traded for one another. We’ve seen rumors of a few future Hall of Famers being unhappy. And we’ve seen this whole Watson thing continue to go on. How all of this shakes out, we’ll have to wait and see.

In the meantime, Deshaun Watson trade rumors will continue to swirl and people will keep speculating. One of those people happened to be Kareem Jackson, with the former Houston Texans cornerback talking about where Watson has allegedly insinuated he’d like to be traded to.

Jackson, who played with the quarterback in Houston from 2010-18, now plays for the Denver Broncos. So, of course, the defender talked to Aqib Talib about Watson’s desire to play in the Mile High City. Take a listen below.

Deshaun Watson says he wants to be a Denver Bronco, according to Kareem Jackson@ReemBoi25 joined @AqibTalib21 on today's episode of Catchin’ Fades with the latest pic.twitter.com/H4DYnH6eWq

Nobody knows for sure if there’s any fact behind Jackson’s claims. After all, he could just be a former teammate and current buddy of Deshaun Watson’s just hoping to play together again. However, if the Texans quarterback is set on playing in Denver, that team’s front office needs to do everything it can to explore a blockbuster deal.

As of the past few months, though, nothing has changed with the Houston Texans, as the team continues to deny any interest in trading their signal-caller. That’s obviously the smart thing to say (and do), so we’ll see if it stays that way as training camp gets closer and Watson puts pressure on the team to ship him out of town — as he’s previously threatened.

While Jackson claims Watson wants to play in Denver, NFL insider Ian Rapoport shut down the enthusiasm pretty quickly after seeing the cornerback’s message. Sure, the Broncos could be a landing spot, but it isn’t necessarily where Watson has been saying he prefers most, per Rapoport.

#Texans QB Deshaun Watson has been getting recruited by former teammates and countless players across the NFL, and he remains open to several options, including the #Broncos. But I don’t believe Denver is “where he wants to be.” Just one possible spot. https://t.co/rTXR4CCVJM

Until the NFL and the Houston Texans have more details regarding the Deshaun Watson sexual assault allegations, nobody knows for sure what might happen with this ongoing saga. But the star quarterback seems to have lost some of the leverage he had early in the NFL offseason due to the situations with the massage therapists, and he may be forced to either forfeit a bunch of money this season by standing his ground and sitting out, or, somehow, still forcing Houston to trade him. Stay tuned.