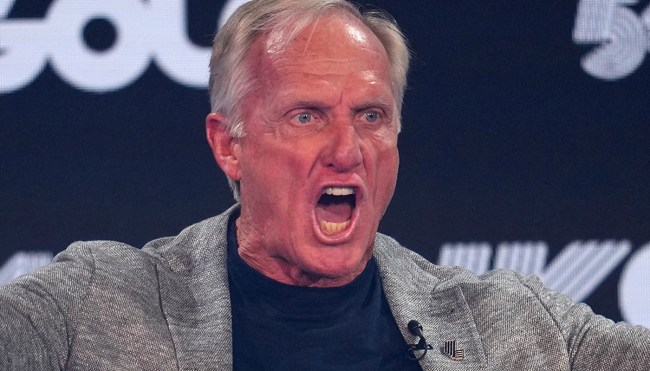 There’s no way to know how Greg Norman thought the world would react when he agreed to team up with Saudi Arabia and take on the PGA Tour as the CEO of LIV Golf, but you have to imagine he knew there was a pretty good chance he wouldn’t exactly be welcomed as a savior.

While dozens of players have agreed to defect to LIV with the help of the massive bags of money that have been dangled in front of them, there’s still a ton of uncertainty surrounding the upstart league that hasn’t even come close to escaping the massive shadow of controversy and drama hanging over every single event it’s hosted.

Norman has also seen his reputation take a fairly solid hit (he—along with Phil Mickelson—were barred from the Celebration of Champions at the British Open this year). However, he’s slowly but surely leaned into his role as the golf world’s equivalent of Brad Wesley from Road House: a man with a vision and plenty of money to burn who couldn’t care less about the bridges he burns while trying to get his way.

On Wednesday, the man known as “The Shark” appeared to fire his latest shot across the bows of the PGA Tour and LIV detractors when he posted a video of a great white attacking a fake seal on Instagram along with the caption “LIVing up to the namesake” (while tagging @TheOcean for good measure).

It’s unclear if Norman is teasing some big news or was simply in the mood to take aim at his many haters.

However, the timing of the post is somewhat interesting when you consider the biggest LIV-related news of the week revolves around a meeting Tiger Woods organized with other high-profile players on Tuesday concerning strategies that can be harnessed to box out their new competitor (there’s also the lawsuit Patrick Reed filed against Brandel Chamblee and the Golf Channel, which certainly isn’t doing him or the league he now represents many favors based on the bulk of the reactions it’s generated).