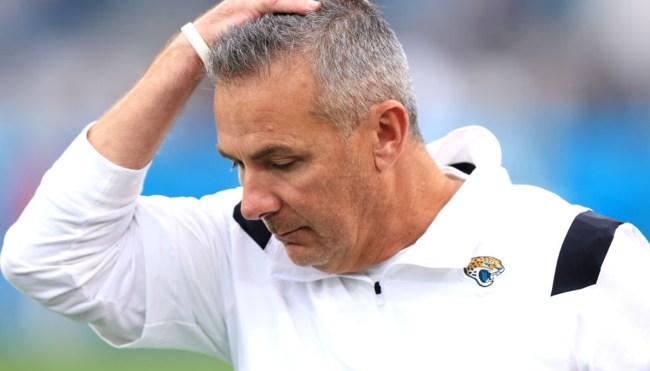 It’s been a little over three years since Urban Meyer unexpectedly announced he was stepping down as the head coach at Ohio State after finding himself at the center of a number of scandals stemming from the behavior of his coaching staff.

While there was speculation ongoing health issues may have played a role in his decision to hang up the headset, he was apparently feeling good enough to return to the sidelines this year after agreeing to take the helm in Jacksonville in the hopes of helping the struggling Jaguars right the course.

The team really had nowhere to go but up after finishing the 2020 season with a 1-15 record, and while it technically improved with Meyer holding the reins, it’s safe to say he didn’t exactly instill the kind of culture Shahid Khan had in mind before the owner of the franchise showed him the door early on Thursday to bring his disastrous time in Jacksonville to an end.

Meyer found his judgment being called into question before the season even kicked off thanks to his decision to invite Tim Tebow to training camp and deploy some questionable tactics to firm up the final roster. It was all downhill from there, as the married coach landed in hot water thanks to a video of him grinding with a random woman at a bar before things reached a boiling point thanks to a recent flurry of controversies stemming from a disastrous meeting with his coaching staff, his inability to keep track of which players were taking snaps, and an incident where he allegedly kicked a Jaguars kicker.

Based on a number of reports concerning the attitude in the locker room, it’s hard to believe many players in Jacksonville were sad to see him go—and based on what Mike Garafolo heard from an agent to broke the news to a number of Jaguars, that seems to be the case.

From @gmfb: The #Jaguars’ players aren’t sad to see Urban Meyer go. A few of them this morning via text this to their agents: “✌️” pic.twitter.com/oGuRi26EN4

On Thursday, the NFL insider said he spoke with an unnamed rep who told him he received an identical reaction from multiple guys on the roster after telling them about Meyer’s firing: a peace sign emoji.